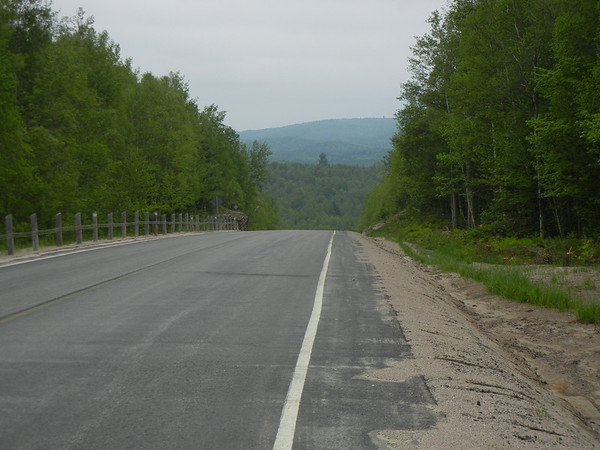 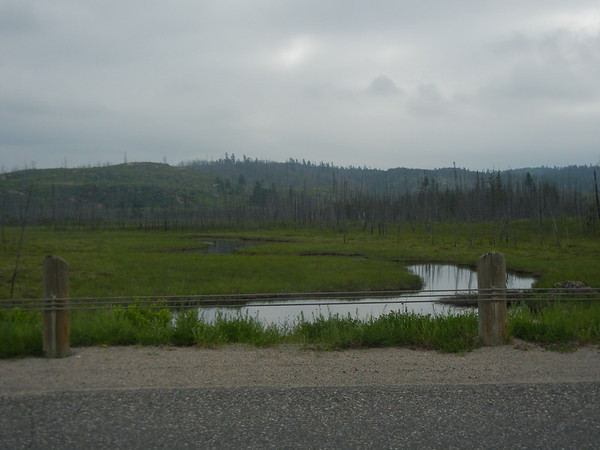 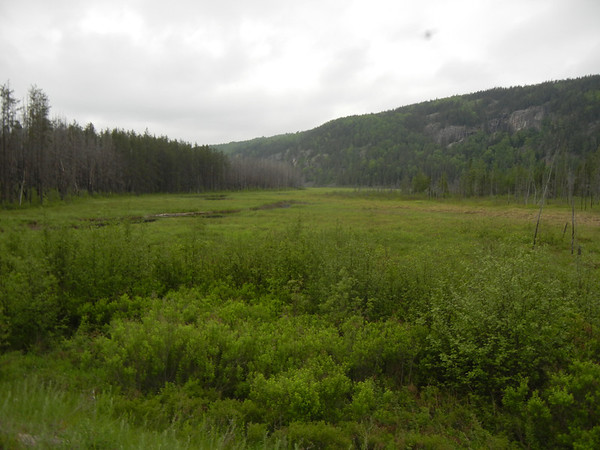 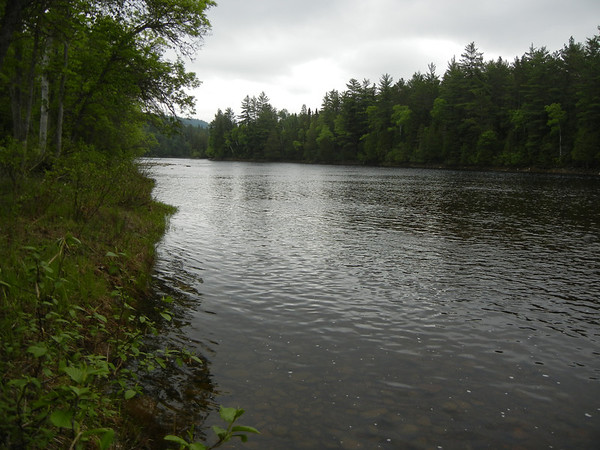 Got off the beaten path a couple times, nothing too major. I was pushing forward:

Got into some heavy mist, which really is almost more wet than rain. Rain suit back on: 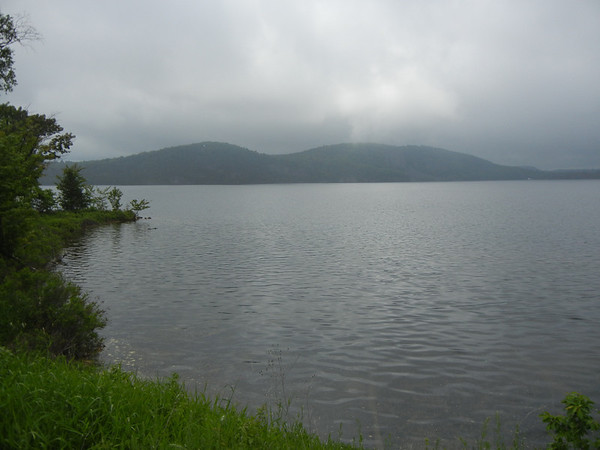 Stopped for some Poutine. I didn't need it, I really didn't want it. But I have never had it, so it was time: 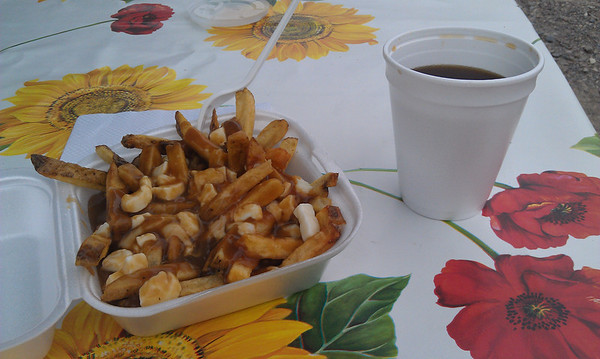 Rain suit off. Then, back into the USA. Took like two minutes. 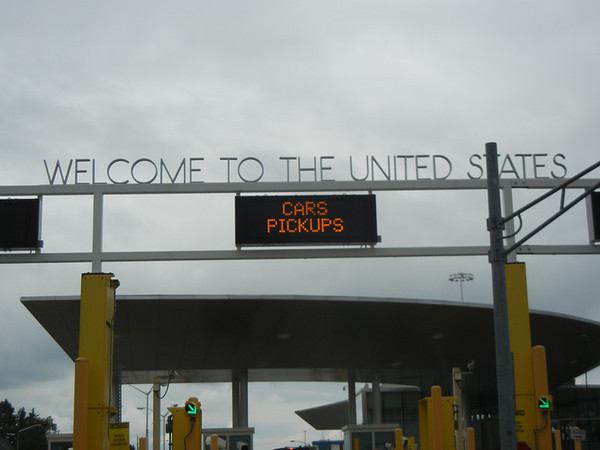 I met up with a fellow Triumkph guy Gear on the other side of the border crossing, and we hung out at a diner chatting about Important Issues for a while, gassed up, and rode a bit. Everyone in Sault Ste. Marie knows George is seems like. It's not a small town, and I think he is friends with half of them:

That was a great visit, and I'm sure not the last.

Then, the rains came. George headed back home and I put my rain suit back on.

Rain didn't last too long. I stopped at a motel because the parking lot was full of US Fish and Wildlife pickups and mobile labs. I used to do field research for the USFWS back in the day, so I was intrigued. But, I am no longer one of those cool guys so I headed back on the road: 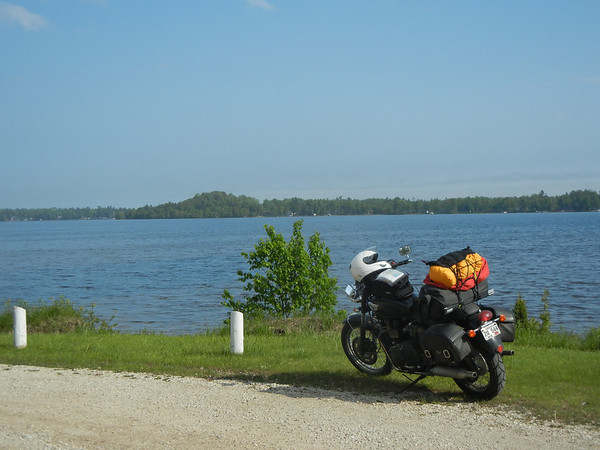 Lots of fog on Lake Michigan: 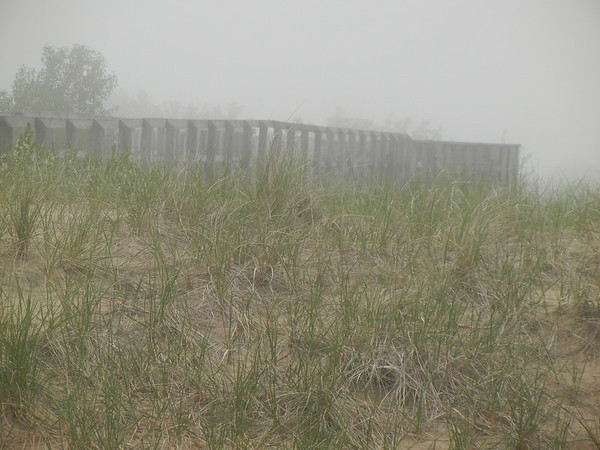 Plan was to motel it in Gladstone, I know a good cheap one there. But, it was my last night and the weather was good. There was a sign to a USFS campsite, I checked it out, and found it to be Good:

It took a lake bath (always a good idea, I think I've said that before): 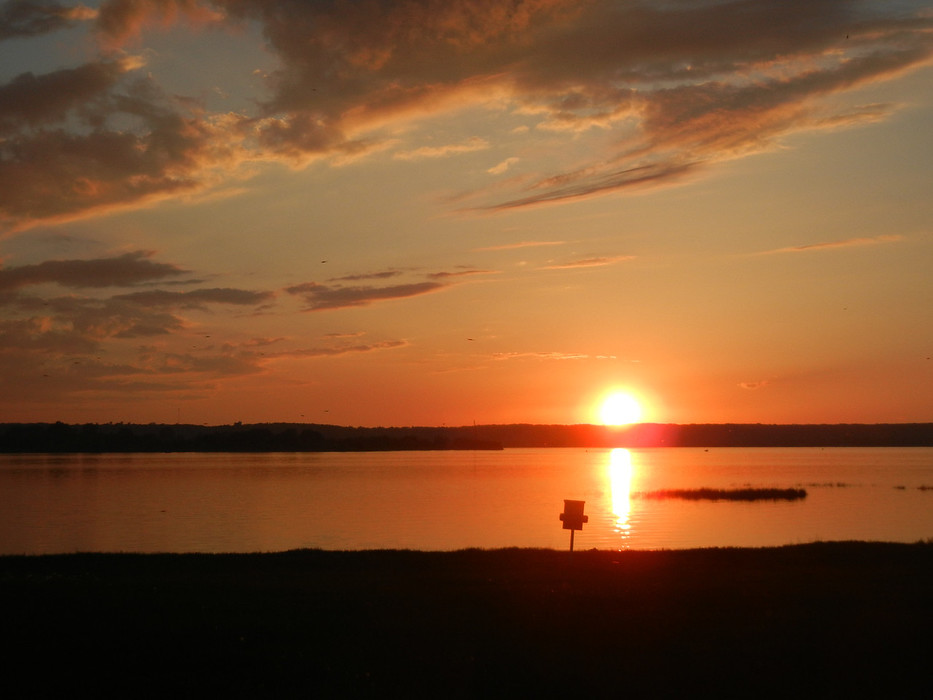 Day 13 - A Breakdown and then Home 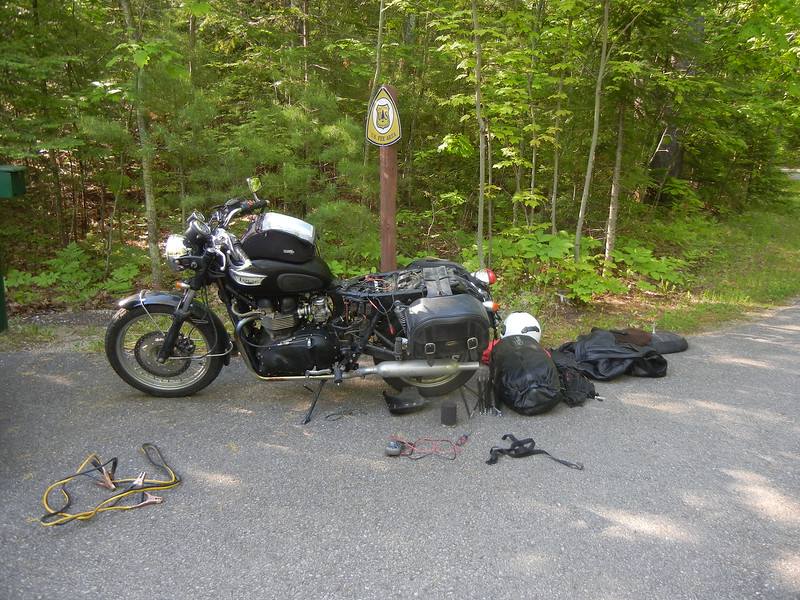 Bike didn't give me any problems until now. I had to keep chain lubed daily, and it drank that half quart of oil. But, it had been dependable, with was good because I certainly had been far from help much of the trip.

That is exactly what I was thinking when the bike didn't catch right away. It turned over and sounded strong, but it didn't start. It would fire briefly but not stay running. I gave it a nice long rest, but still no go. Until I killed the battery.

Certainly seemed like I was going to be spending another night on the road.

So, I had to find help. The campground was empty. I walked forever before I found a fellow camper, but when I did he was friendly and had jumper cables.

So, he put the black cable on his alternator, the other on his battery. I hooked up my bike, and nothing. No gauges, no power at all. I disconnected and still nothing, no power at all. Like I blew some major central fuse.

Twenty seconds later, I turn the ignition key again on my bike again and now my gauges work. What the phuque???

So, like a rocket scientist I try again. I carry a multimeter on these trips. I hooked up the bike, and find zero volts across the jumper clamps.

So, I disconnect and take the multimeter to his truck to do some testing, not because I had a plan but I was confused and didn't know what else to do.

He had his black clamp on his alternator, and his red clamp on on ... the battery ground terminal. Not the positive terminal.

So, we had shorted out my battery.

Which I guess is fine, because once we sorted it out and tried again, my bike fired up immediately. And I've had no problems since. I've tested the charging system since, and everything seems up to snuff.

Well, it's just one of life's mysteries.

Now it was a late start, about 10AM I think. I still wanted to get home today, should be doable if I hurried.

But if I wasn't refreshed, I was going to be miserable, so I grabbed some breakfast first: 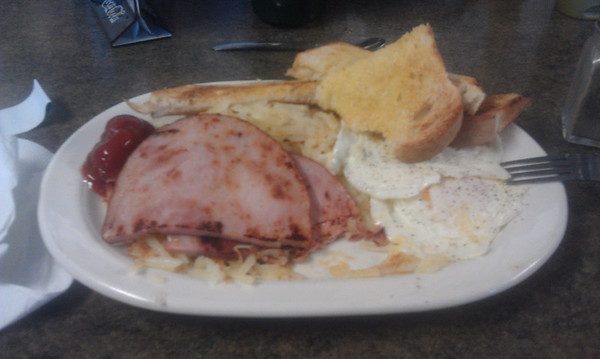 That's really it. I was quickly back in Wisconsin, home territory. And actually, some of the best scenery of the entire trip. I only took one more picture though:

So, time of year ... this was a bit early. Maybe early August is best. I don't know. Anyways, regardless of time of year, it beats not being on a trip. 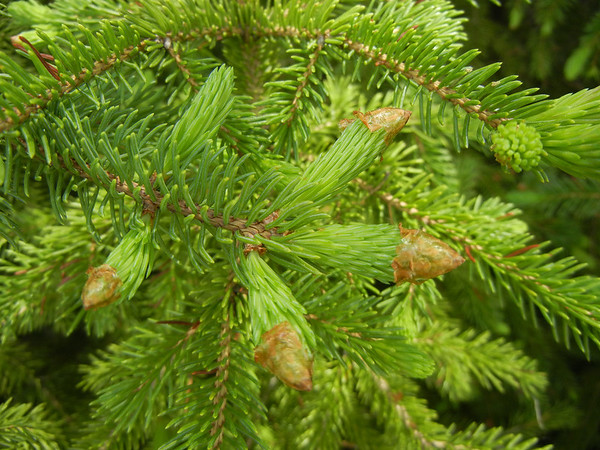