Day 7 was a couple hundred miles I think, my Dad and I exploring routes MotoVermont had pointed us to. Dad didn't want to do any gravel or pound too many miles. He doesn't get a chance to ride very often, and points out that he's broken the 70 yo mile mark and I need to start taking it a little easy on him. 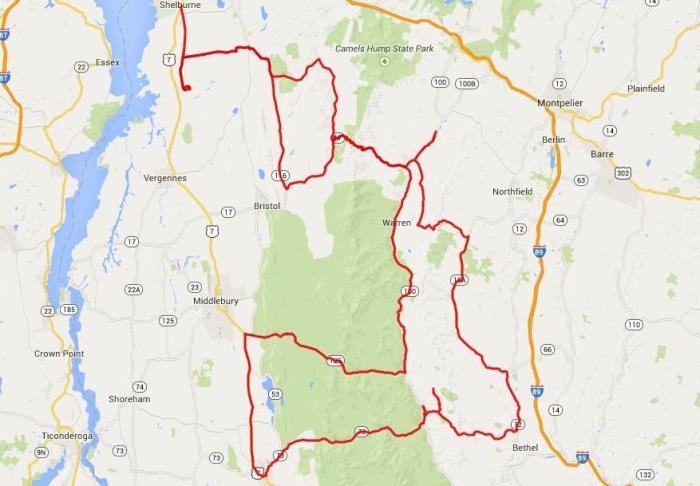 The best stretch of road was this piece of 17: http://goo.gl/maps/rXCAL. We had been following a pickup, at a respectful distance I hope, and he pulled over to allow us to pass. So we got to ride through as quick as we liked, lots of fun. I swapped my kickstand for a Thrux one when I put on longer shocks, and I had to bend that extender part to make it work. But I didn't have it bend inward enough, and I kept grinding it. That got fixed in an unfortunate incident later in the trip. The road is a bit rough and I was at the limits of my shocks, but it was a fun piece of road and Dad and I rode it hard. 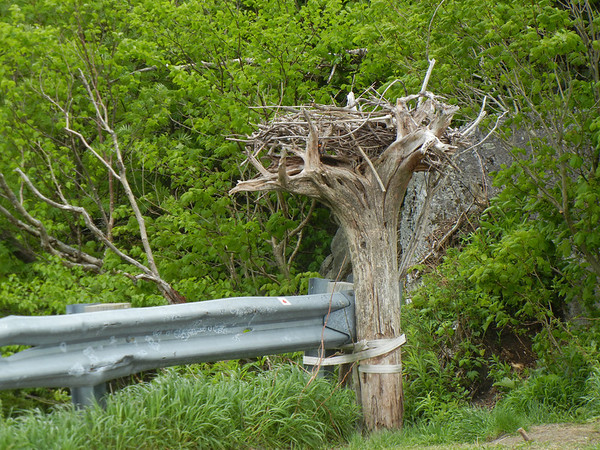 Nice talk with a couple of Canadian retired guys on a tour on their Beemers, then wandering around:

Alright, this is the biggest find of the trip.

We stopped at a turnout for Mount Horrid, which has a lot of bare rock and is apparently perfect nesting ground for peregrine falcons and the like. While we were chatting, a moose walked out into the swamp:

But, that's not the big news. The big news is that from the side of Mt. Horrid, we heard a Prerodactyl scream. We heard it several times, and we both heard it so we have confirmation.

This is big news because until now the Pterodactyl was considered extinct, so it's a bit of a shocker. I wouldn't believe it myself if I hadn't heard it myself. I've called the Smithsonian Museum of Natural History, and apparently they are in a bit of shock since they aren't able to discuss the topic. You know how scientists hate it when you challenge their paradigm.

Then back on the road: 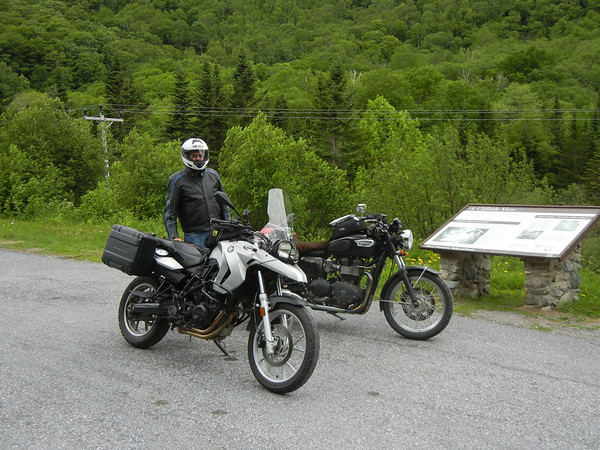 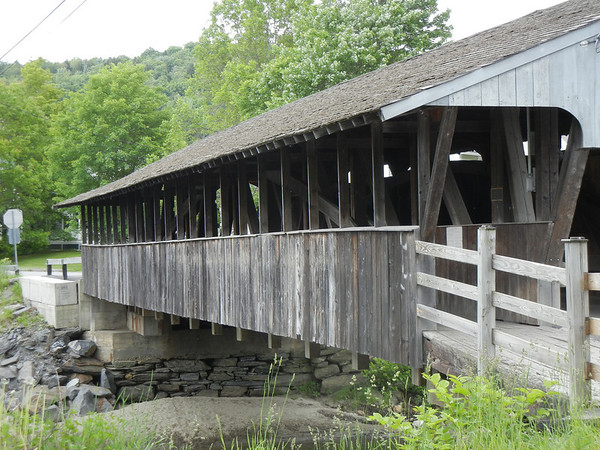 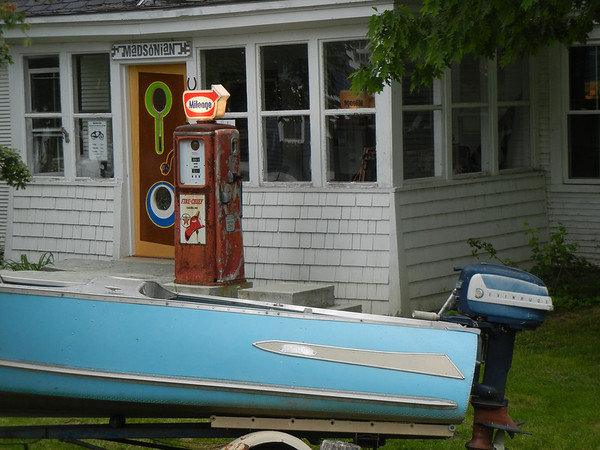 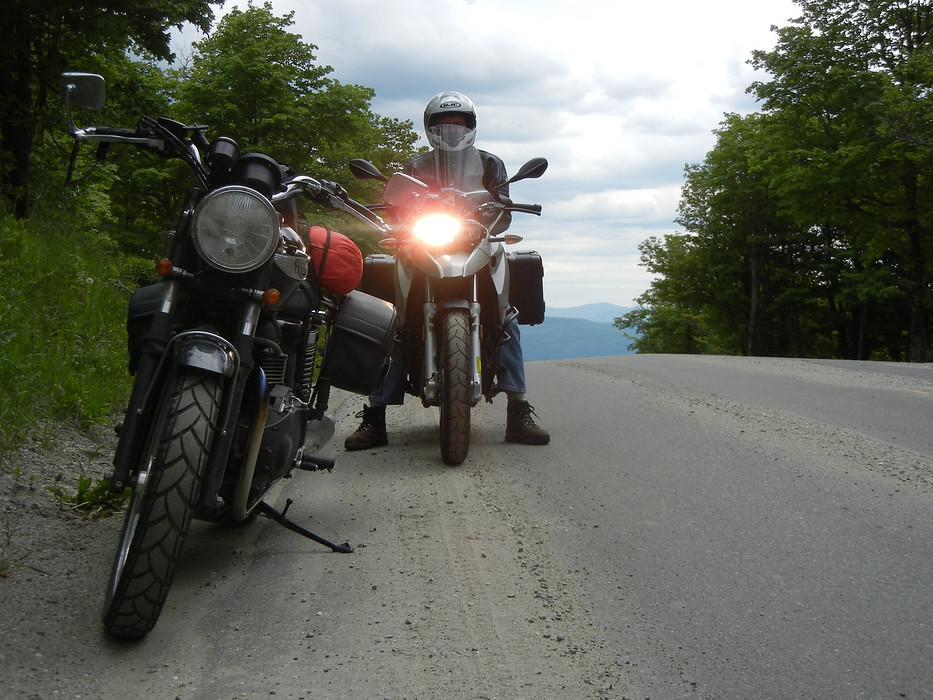 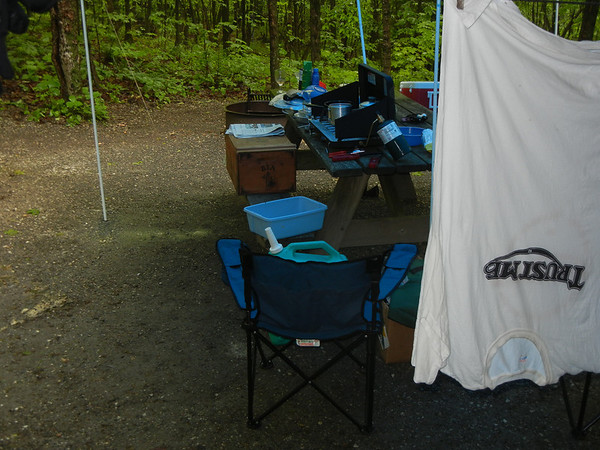 My martini is the one with the rock in it, that's how I identified mine. My dad's method is that the glass with the most gin in it was his, so I needed to develop an alternative method.

It rained pretty good all night, and lots of rain in the forecast. 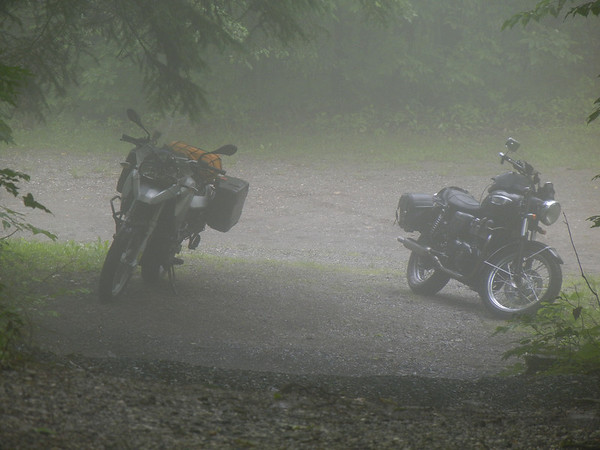 So, we decided to go out to breakfast, to the a laundromat to get my clothes properly washed. That ate up the morning. Then we rode to Burlington for lunch. 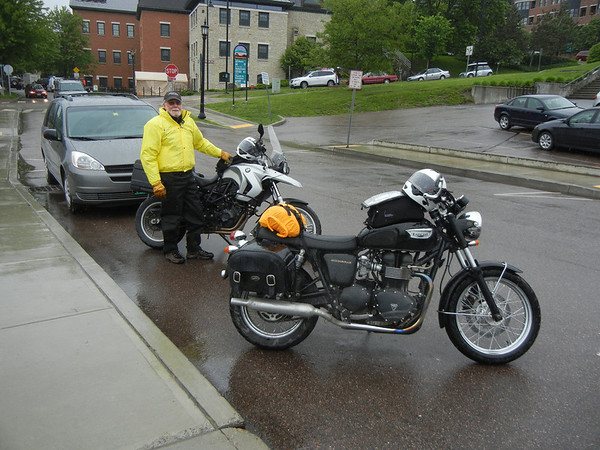 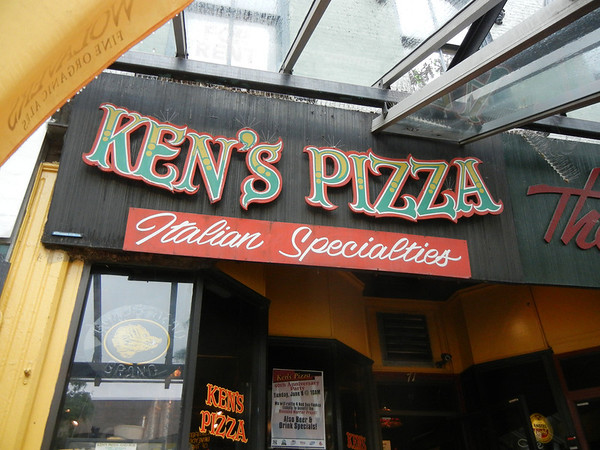 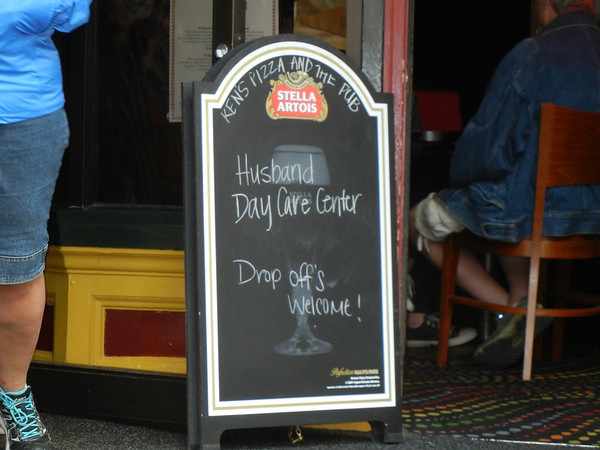 Had a nice lunch sitting outside, which was probably ridiculous. But I was in outdoor mode and didn't feel like sitting under a roof.

So, these two young ... what? ... homeless-probably-by-choice hippie/hobo/vagrant types come by the patio. Boy with a cat on his shoulders, girl with a dog on a leash and some backpacks. All mangy. Guy pokes his head into the garbage can and says, kinda excited, there's a big piece in here! So he stuffs his arm and head in there trying to dig out the pizza. His pants have now about fallen down and his vagrant butt cheeks are pointing right at us. Bartender comes out and tells them to get lost, more angrily than was really necessary. Words exchanged about proper ownership of discarded pizza. Bartender leaves, boy dives back into trash can, bartender returns and shoves vagrant boy. Angry threats that "I'll call the cops" from both of them. Damn, I wish I had thought to record that, it was epic.

Burlington seems to be full of hippies. I am pro-hippy. More of us should regard the materialism around us with disgust. More of us should believe in the power of love and peace. More of us should ditch more cultural norms. We have lots of hippies around Wisconsin, most of them living off the land in a communal sense, but with less "free love" and more monogamy. Often selling awesome food. But Burlington is full of vagrant hippies and hippies with too much money and attitude. Like because they have adopted a certain style of dress and listen to "the right music" they are better and cooler than everyone else. Losers. I picked up a lot in two hours, huh?

Back at the campsite we ate and drank more. I have a friend Alan who's sick and bed ridden, and we record jokes and send them to him sometimes. My Dad and I recorded a couple. Enjoy. Don't forget to tip your waitresses.

Day 9 was the last day for Dad and I to ride together. Bike was due back to MotoVermont by 5, so that turned out to be in the back of our mind all day. But, ferry over to the Adirondacks, a bit of riding to a nice breakfast and a slog through Lake Placid, and back: 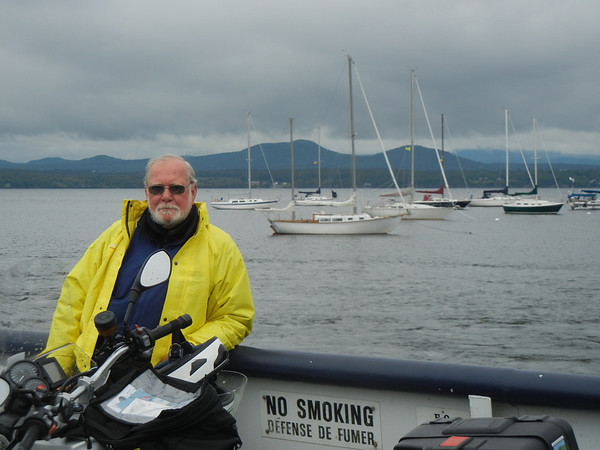 I had a bit of map trouble, this sort of thing didn't help: 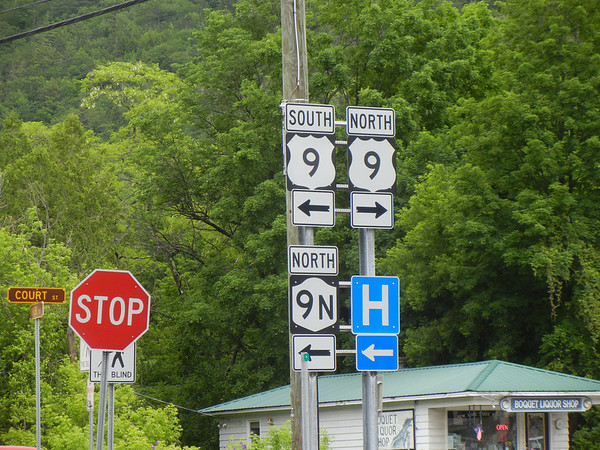 Then back to Vermont:

And return the bike to MotoVermont:

MotoVermont (http://www.motovermont.com/) is great. Seems to be a couple guys who really enjoy motorcycling, especially the ADV stuff, and making a living doing it. Very fair prices and straight forward guys. Really giving with their time and pointed us to all the good roads. Highly Recommended!

At one point Dad and I planned to go out to dinner. But, we were really enjoying the campsite too much, so we did steak and beans instead.

We did not have great weather, but that didn't get us down at all. I had a really great visit with Dad, and he said many times he was glad I invited him. It was really pretty excellent. Really excellent actually.