It was weird, normally I spend all winter dreaming about my summer ride, planning routes, annoying my wife with incessant chatter about it. But this year I really had no plan. I usually do a solo lone-wolf ride (because my wife is cool and doesn't mind), but now I have one kid out of the house and the other drives and we barely see him, and they're old enough to watch the house for us. So now it's easier for us to travel together, and I guess my planning switched to a week-long ride with her. I figured I'd still do a solo ride too, but I didn't have any plans.

Every year my rides have pretty much ramped up ... further, longer and more remote. Last year was a full two-weeks all the way up to the north end of the Icefield Parkway in the Canadian Rockies. And it was a fun trip, but not always easy. It is a hard one to top. I think that was one reason I was having a problem thinking up a trip. This year was bound to be a de-escalation, which isn't as easy to get excited about.

So, as we got close to July and I realized the family summer schedule was filling up I figured I better get going somewhere. So I figured I'd head north and cross into Canada at International Falls, just because I haven't been over there yet. And, well, see what happens. 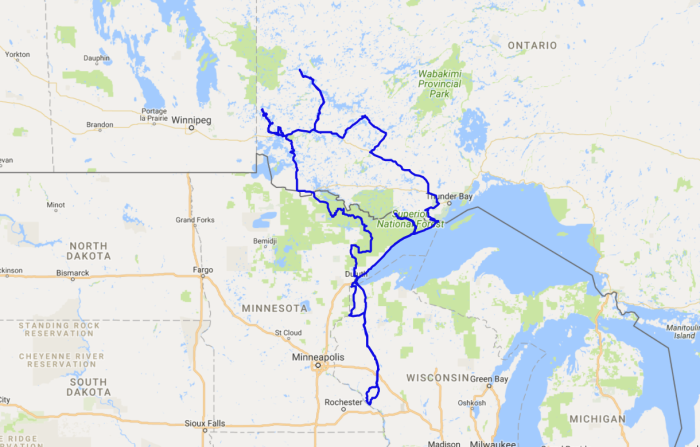 I set out on July 4th. Wife rode out with me and we took the back roads up to Eleva to a nice diner up there for breakfast (Pammy K's). Wife had asked if it would be open, and I said of course. She asked if I had checked, and I said yes. But I had lied and it was closed. Wife just rolled her eyes, she's used to this sort of thing. So we had bad breakfast sandwiches sitting at a picnic table in front of the gas station, then said goodbye.

I put in some earbuds and listened to podcasts while I made time taking Rt 53 up to Superior. I typically do all I can to avoid four lane highways, but Rt 53 is actually a pretty one and I wanted to make time to get to the northlands, then lay back and enjoy once I got there. 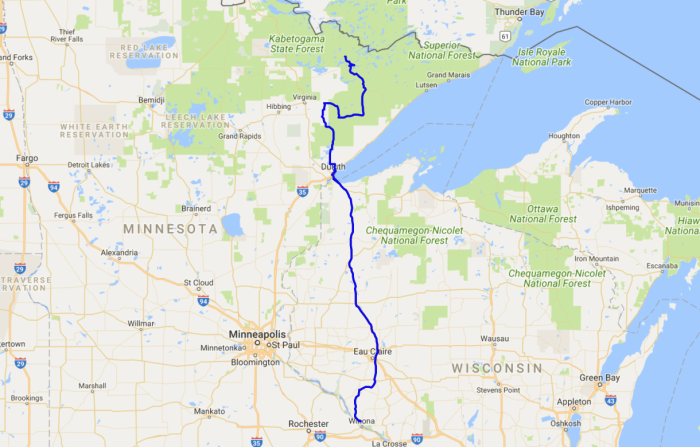 I had a couple ideas for the trip. I intended to cross into Canada at International Falls and come out at Pigeon Falls. I saw the Echo Trail that heads north out of Ely, MN on a map, it looked kinda remote and I wanted to ride that. A friend had told me Kenora was a fun town, so I was going to go there. And possibly ride up to Caribou Falls, just because I saw it on a map and I wanted to try and get that far north.

So for my first night I figured I'd stay somewhere near Ely. When I got to Superior it was just plain cold. I had felt the cold off the lake for a couple miles coming into town. I didn't particularly like it, and decided against riding along the north shore. I decided to head due north out of Duluth instead, I haven't been up there before. The lake is too much of a magnet for me. So I got gas, put on another layer, and got me over to Duluth and headed up the hill.

In Duluth where Rt 35 ends and it narrows into a couple city streets a Jeep tried to kill me. At the last minute its driver realized he was in the wrong lane, so he made a sudden move into my lane and attempted to occupy the space I was already occupying. My high school Driver's Ed teacher told me that when two vehicles occupy the same space at the same time it is called an "accident", and I should avoid them. So when I saw him coming from the corner of my eye and I gassed it quick to get in front of him. Motorcycles are fun that way, maneuverable and quick and all. My adrenaline was pumping, but I didn't use the horn, I didn't give him the finger. At the light he ended up beside me, he deserved a glare, but I ignored him. As a motorcyclist I should have foreseen such behaviors at a confusing piece of highway. And I try to be a pro, and he wasn't worth my anger.

I did my best to navigate north by feel, but ended up studying my phone a couple times. I rode around the Duluth campus which is pretty beautiful. It was warm, the sun was out. I put my earbuds back in and listened to some of the Dead's Europe '72 album and rode on about as happy as one can be, it was a beautiful day. Almost forgot it was the 4th, but I came upon Island Lake Park up in the middle of the north woods and it was in full vacation mode, grilling and games and swimming. I hung out a while absorbing the vibe, some young boy on a push scooter asked me all about the bike with bit of awe. That's always fun. Nice relaxing stop. 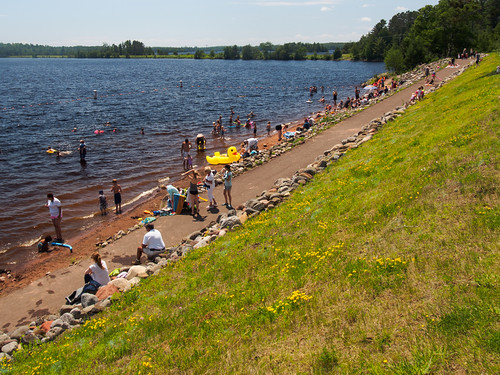 I got into the National Forest and saw a wolf. Just a great wildlife sighting, he crossed the road maybe 50 yards ahead of me, and came across in a casual lope. Gave me a good long look at him. Kind of black with mottling of white, or vice-versa. I assumed he was a young male traveling alone, but not sure why. In retrospect I wish I had stopped at the top of the next hill and watched to see if he had any pack mates with him. But for whatever reason, I expect he didn't. Saw a mink shortly after that, it was a pretty good wildlife day. 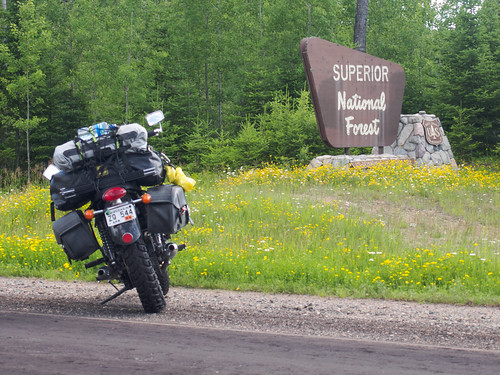 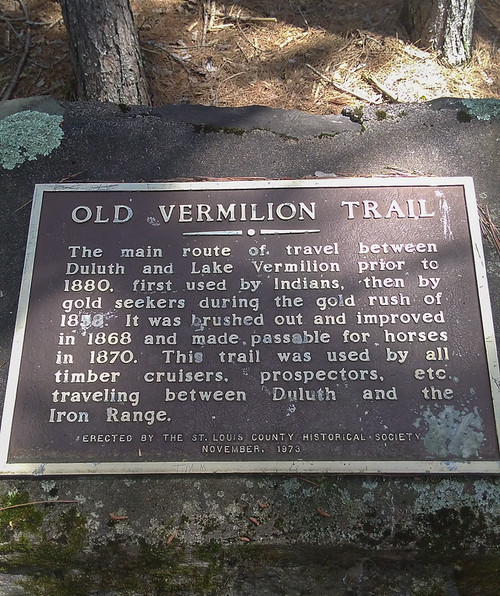 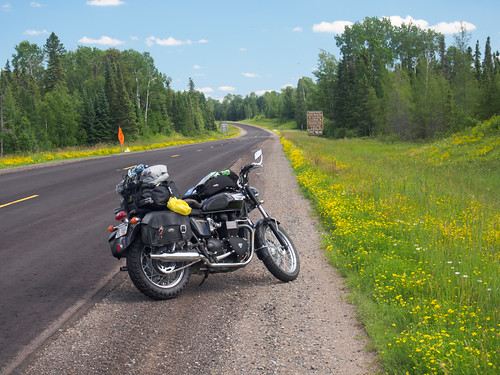 I worked my way over to Rt 1, which used to be one of the best motorcycle roads anywhere until they "fixed it" and straightened some curves and widened it. Used to be you ran a pretty good chance of whacking your shoulder an a 200 year old white pine in a tight corner if you didn't watch yourself. But it's still a pretty good road. Got up to Ely and floundered a bit deciding where to sleep. I ended up in a USFS campground a few miles up the Echo trail. I like the size and location of those places, but they do suck for finding level ground for your tent. And this one was all cut over. I'm guessing that the pines had died from some disease, so they cut them down to control the fire danger and collected them in all these piles. Took all my self control not to take a lighter to one of them, cause they would have burned good. 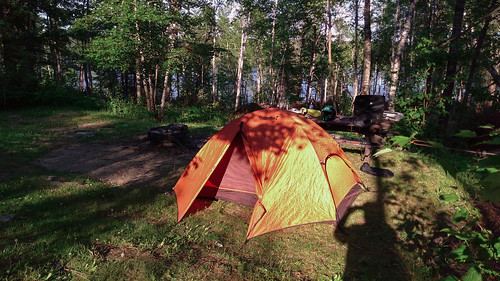 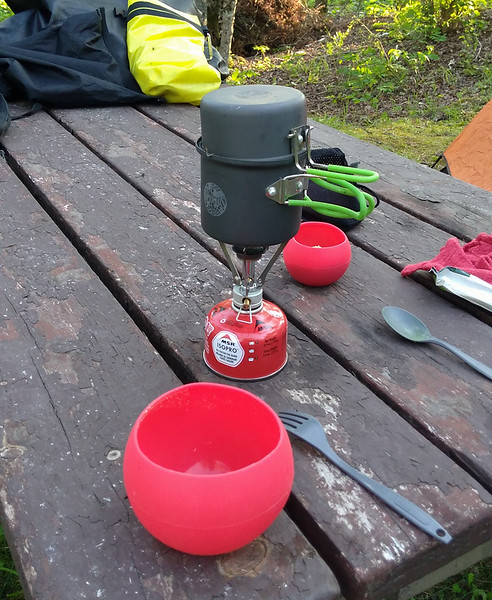 After a bath in the lake I lay in my tent listening to the fireworks back in Ely. There was a line of thunderstorms coming and I'd check my phone occasional to see if I was going to be hit. Eventually that line of thunderstorms congealed into a single cell, and that cell landed right on top of me. It was an odd storm broken into three parts: first strong winds, then sheets of rain, then the thunder and lightening. I liked the natural fireworks better actually. The tent held up and kept me dry as I laid there listening to the show. 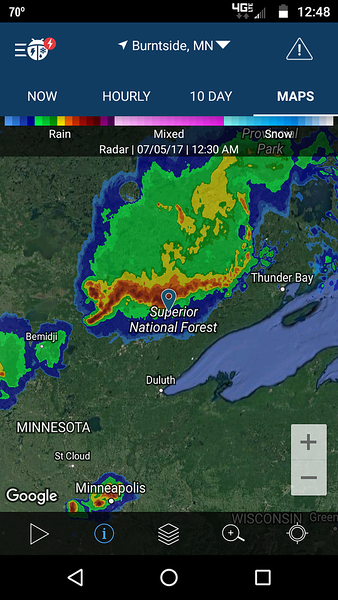