Day 5 was about 400 miles, heading into upstate New York and skirting Ottawa on the way.

Weather was good, no rain gear needed all day. And the day started off great.

I got all packed up. Everything put away except a little bit of trash on the picnic table I needed to get rid of. This squirrel comes into camp, and with me standing right there, just sticks his head in the bag looking for treats. The thing was perfectly tame.

Here's a video of the guy:

Then, the guy goes over and thoroughly explored my bike:

Then I killed it and ate it.

Then I made some miles: 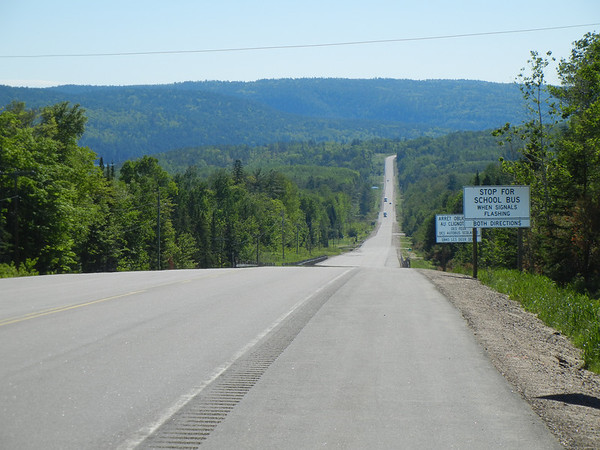 Plan was to skirt around Ottawa, and it started out great. I got into a real scenic area, a lot like New England: 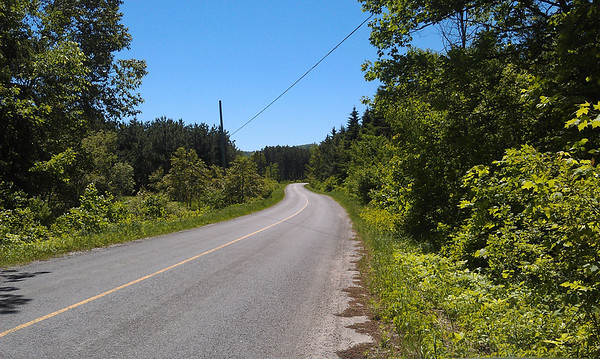 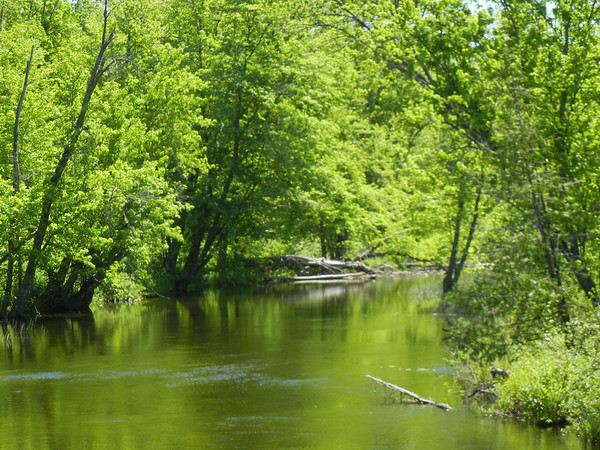 Then I got into the outer city slog. Towns full of srtip malls and traffic and traffic lights. I am now of the mind to blast through cities and put them behind me directly instead of this avoidance stuff. That's what I did on the way home.

But I made it to the border without too many map-reading snaffus. Crossed a high bridge with a grate surface, that's always fun. Dirt riding has got me more used to that kind of motion from the bike, but not totally. An easy cross into New York through the border.

Then some of that New York hospitality. The visitor center had just closed and I wanted a map. Two nice ladies came out. One went back in to fetch me a map, another gave me directions to my campsite. Just the nicest folks. There is New York, then there's New York.

I got on my way, and stopped for some genuine pizza. We all think the pizza we grew up with is the best kind. I grew up on New England pizza, and grinders, and I love it. We also go to the package store, the packy, for liquor. And we fished for kivas.

Anyways, this is the stuff, perfect:

Then I followed my directions and ran into a detour. Now, sometimes these "Road Closed" signs mean nothing to the proper dude on the right motorcycle with the right tires. Sometimes, they mean the road is closed. This time, it was the latter:

So, I had guessed wrong. It was 15 miles or something to that point, and I had to double back. Then follow the detour. Went through Degrassi, which is the name of a TV show my daughter used to watch, so I took a pic. I was happier than I look, I think I was just concentrating on the camera:

I wasn't able to find the dirt road the nice ladies had directed me to, but I did find the campsite. Got there a bit late, and the site I was assigned looked like it would become a puddle if it rained. No one tents anymore, they're all setup for RVs. So I took a site I wasn't assigned to. Because I'm a rebel biker:

Then, make sure the flasks still have liquids in them. Double check. And down to the lake for a bath.

I don't care how tired you are, or how cold it is, or how much you don't feel like it: in the end a bath in the lake always turns out was the right decision. This time a beaver kept slapping the water while I was in there:

Then, a couple more checks that the flasks weren't empty, a little Django Unchained on the kindle fire, and to bed.

Day 6 was a nice short day. The trip has three parts: ride out, ride with my Dad for three days, ride home. Day 5 marks the end of part 1. About 100 miles I think.

The Adirondaks are really beautiful. I had been disappointed the night before, but I hadn't realized I wasn't into the meat of them yet. 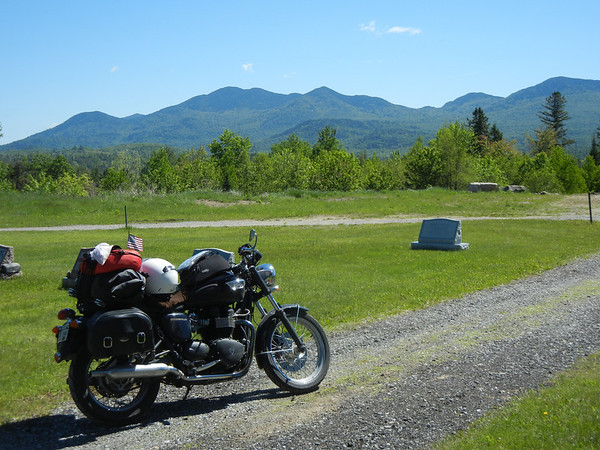 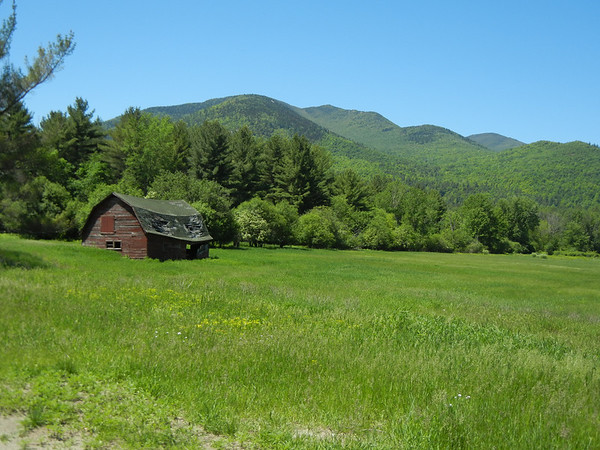 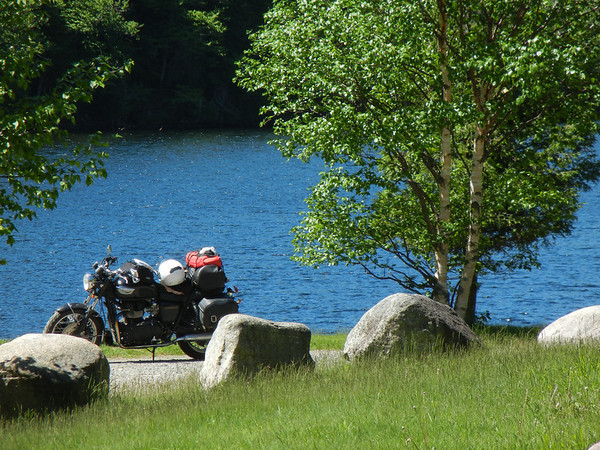 Skirted by Lake Placid (much better than going through it in this case, unless you want to interact with a throng of humanity): 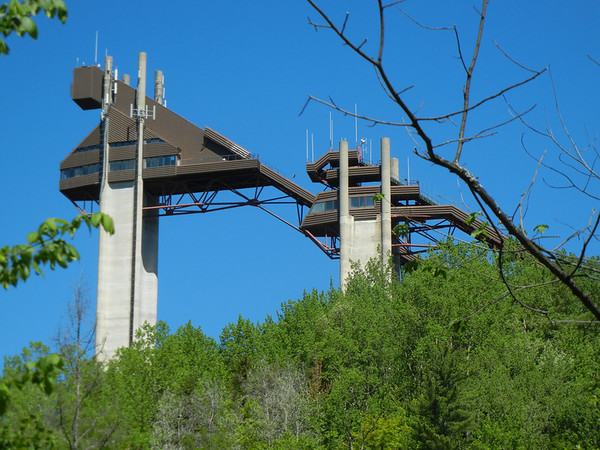 And got just a great breakfast. 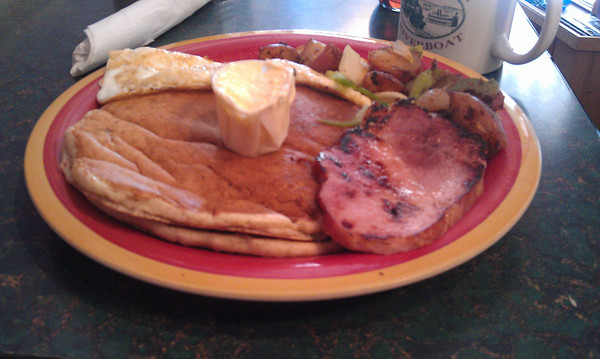 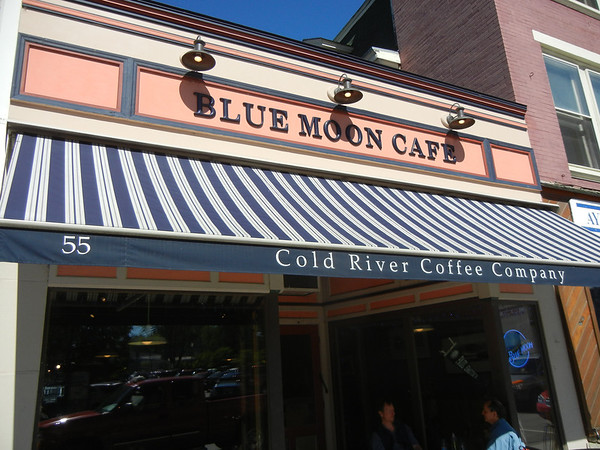 Then the ferry across Lake Champlain. It costs like $6 and runs every half hour. Nice and easy ride. 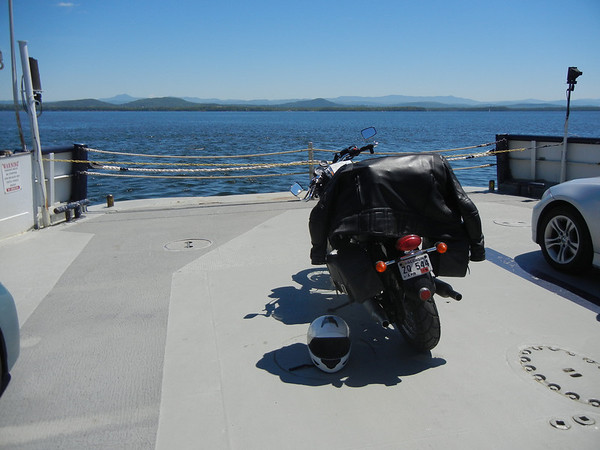 Chatted with these folks. And their owners too:

Found my Dad, and picked up his bike at Moto Vermont:

Got camp setup, and got down to business: