My Dad has bought a Bonnie since we rode last year. We have a cabin rented at the Watkins Glen State Park and we spent a few days together there riding.

The weekend prior I put on a new set of tires, Heidenau K60 Scouts in OEM sizes. Rebuilt the rear caliper, fresh brake fluid and pads front and rear and an oil change. Also put the bash plate back on.

Yesterday I noticed the clasps that hold the saddlebags on were giving way. So I shored them up with bolts. When that was all done I was feeling pretty good about myself, then I realized the bottom of the bags were in the process of blowing out, bummer. But I think I was able to do a reasonable repair there, it will hold.

My route for the trip is on spotwalla: https://spotwalla.com/tripViewer.php?id=b2795403f76c059a9 I used it for the first time instead of using My Tracks on my Android phone. It was a kinda nice because my wife could follow my progress, but only when I had Wifi. I was able to convert it to a Google Map after:

Day 1 For A Weekend With College Friends

Friday I bailed out of work late afternoon and make a direct run over to Oshkosh, in time to make the Flash Gordon showing at the Time Theater. Complete with music from Queen. Some folks thought it was a bad movie. It's not that they were wrong, they just missed the point.

Then it was a weekend with college friends. Special in a way that is hard to explain. We will drank too much and pretended we're as young as we used to be.

Mike had lung cancer that has metastasized. He has since passed. This weekend he was strong, chemo was treating him well. I think we all remember it as the last great weekend with Mike. We sat out late and laughed until our sides hurt.

Shelly and I got out on a ride, she rocks the little 250.

The nerds played dungeon and dragons out back, including my family:

The cool dudes sat out front and drank this:

While sitting around boiling oil

and made a brown dinner:

We stayed up late, retelling old stories and making up new stories. Todd had a rape whistle that sounded like a choo-choo train, that seemed damn funny at the time. And eventually the old pictures came out

It was one of those weekends that will go down as one of the best in my life.

Monday morning I hit the road before anyone else was out of bed. It was raining, and I was hung over. I took some four lane up to Green Bay, then hugged the coast up to the UP. Not much lake access though. There were stops that took longer than they needed to. Floundering looking for a cafe, pulling over to close my eyes for a minute, messing with rain gear. I was tired and hung over.

Rain gear came off once I hit the UP. Saw some roadside art while stripping it off: 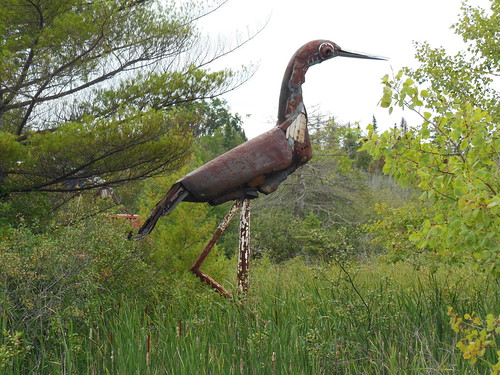 Roadside art on Rt 2 in the UP

My goal was to get into Canada and north of Sault Ste Marie. But I was already behind schedule, and when I got into forest service land there were some dirt roads that called my name.

Much of this trip involved deviating from the plan to follow an immediate whim. Which I guess really was the plan anyways, kinda roll with it ...

Then to Whitefish Bay, and a campsite right next to Superior, well short of getting to Canada: 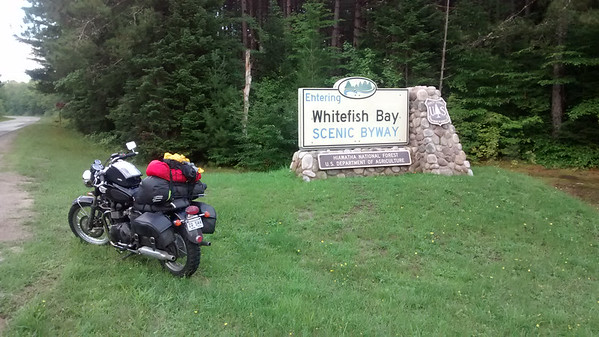 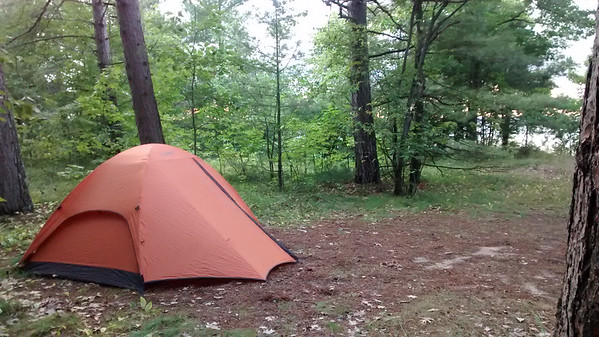 Once I was setup, I took a bath in the lake. But then, the rain came in. It turned into a shower, which was really kind of fun. I turned into my tent soaking wet probably around 8:00, and got some much needed sleep. All was good.