Day 10 was about 460 miles, interstate north from Burlington and through Montreal. Then into more remote areas of Quebec.

It was going to be a long day (for me), but I was going to knock off a lot of those miles early and efficiently. But no stress. Got up a bit early and packed up. Got the big stuff packed with my Dad, and left him to to finish up alone. Again, we had a great visit and I was sorry to see it end.

Then earplugs in, set Google Navigator and trust my fate to it, and listen to some podcasts.

Crossing into Canada was trivial, no issue at all.

I used to hate interstate. In my part of the world I don't get a lot of opportunity to ride it. But, now I don't mind, and cutting through Montreal was kinda fun. Really there are more options and maneuverability on a bike anyways. Gotta watch people's blind spots, but even if someone comes over on you can can ride between the lanes if need be. I was a bit late for one exit, and basically took it last minute next to a car. But it wasn't an aggressive move, there was plenty of room.

North of Montreal was beautiful. A real unique topography with lots of small, green mountains. Lot's of skiing. I got off the highway to take pictures a couple times, but I guess I didn't get any. It was hard to find a perspective to get a good one.

Had a series of rolling parking lot conversations with this person and that. People joining and leaving. Always navigating who spoke French and who didn't. Most could switch to english for me. It all started with this car, which was obviously loved, and his owner did enjoy it quite a bit:

The I got out of the crowds and into more remote Quebec:

I stopped at a Kawasaki dealer to get a small can of or aerosol chain lube. I mentioned earlier that my bike was making noise early in the trip, and I was worried my front sprocket was loose. It was just chain noise. The chain needed a good lubing every day to keep it happy. I had some liquid stuff, but it was a pain. Anyways, I bought a can of spray stuff here.

It was open on a Sunday and they were having some sort of event, giving test rides. I came in on an obviously cool bike, obviously on a tour, and the patina on me and my bike made it obvious I'd been out for a while. You think one person would show some interest? Chat with a fellow biker? Nothing. Nothing at all. I suppose they were just afraid that all the potential buyers might jump ship for the Triumph brand if they got exposed to a proper Triumph rider.

Pulled off for some fried chicken at some waterfalls.

Those Can Am Spyders were everywhere in Quebec.

Got into some sort of provincial park, I guess, it was all in French. These french have a different word for everything: 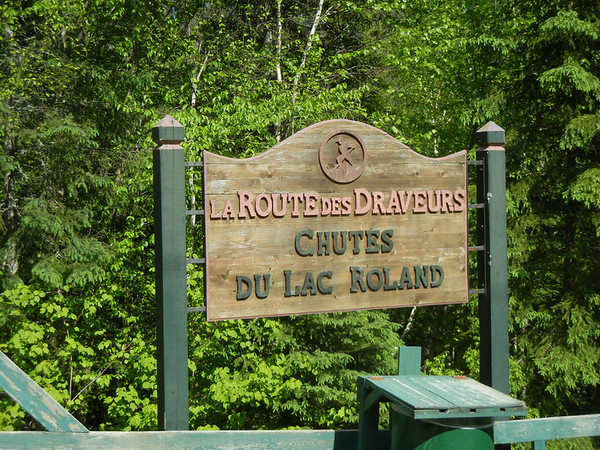 Apparently the Sol was Glissant

So, this is one of the highlights of the trip. I got on the north end of this provincial park. I was about an hour from Val D'Or where I planned to find a motel. It was late afternoon about 5. I had a bit of time to explore, and there was a proper dirt road. Just a little bit ...

It started as a logging road. I got off the bike, and right there were tracks and sign. I came up through boy scouts, and have a degree in Wildlife Biology, so to me, good sign is as cool as seeing the animals.

So, right there, moose track, what was coyote or wolf track, and what was of a size that it had to be bear scat I think, all right there. And human pee, to top it off, by the time I left.

And back down the road, it kept getting a bit more rough, but not bad:

So, environmentalist hate to hear it, but wildlife love these clearcut areas. They love edge, and new growth. There were animal tracks everywhere. Including this one. That track next to the moose track I thought was wolf because it was so big. But these things I think are wolf, and that coyote. These were huge. My boots are 10 1/2:

Come on, that is cool!

Then I headed back out. I thought about camping out there. But really the bugs were horrible, and I was tired. I probably should have, bet I would have had some wildlife encounter stories to tell. Ah, I still don't know if it was a mistake or not, but I found a motel.

I love the dirt roads. Actually, what I love is finding the most remote places I can. Seems I can't get myself far away enough from other people, which sounds kinda anti-social but that makes it an adventure for me. And those spots are often at the end of dirt roads and paths.

I pick my way down them, I'm not an aggressive ADV type.

This whole rolling into town and finding a motel is a tough one for me. I tend to ride late into the day, it was pushing 9 PM when I was looking this time, and I was tired and hungry and that can lead to just a touch of getting down, and not wanting to deal with an expensive or crappy motel, and certainly not an expensive crappy motel. I had to search around, but this one ended up being perfect. Locally owned by a nice lady, nice and clean and pleasant.

Then across the street for a couple gyros for dinner, along with those awful things Canadians call french fries. It is a fine country in many ways, but not on the hamburger and fries front:

There is all this talk about people in Quebec being difficult about speaking french, and refusing to speak english even when they can. I hear the story all the time. Maybe that happens in the cities, but what I ran into was some really nice people who really couldn't speak english. The lady in that Greek place was just really uncomfortable, she had no english at all and I had no french. That happened a couple times, and a couple times people had broken english only. And plenty of times they spoke both. But parking lot converstations alway being with navigating which language we'll speak. I really have a feeling it cuts down on people striking up random converstations with each other, and makes it seem like people of more stand-offish with each other.

Day 11 was a a more northern sweep through Quebec and into Ontario. I picked the northern route because I wanted more wilderness. But, I really just got into heavy mining and logging land. Bit of a disappointment, but I've not been there before and now I have, so still a win.

I was low on oil, so I stopped at a Suzuki place and bought a quart. I could have gone to walmart across the street, but I only needed half he quart, so this way I could use what I needed and donate the rest back. 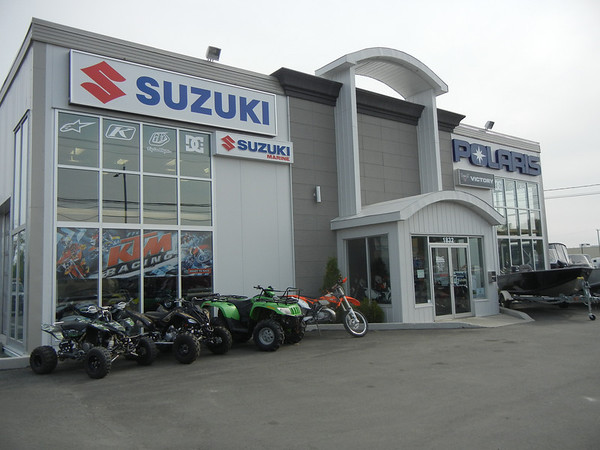 Lots of seaplanes around:

"Together Building Sustainable Value"????? Whoever came up with that is soul-less. And what is sustainable about mining? The gold grows back??

And I saw a moose:

And an interesting town name:

I passed a Google Street view car on this stretch. I stopped and grabbed the exact lat/long of the spot and I'm monitoring the Street View website, I'm thinking they have me on camera!

At one point I dropped the bike on it's side in gas station, just forgot the put the kickstand down. No picture. But remember how I was grinding the kickstand extension? The drop fixed that problem, and no other damage. So it was a win.

Then to a motel. Actually, no picture of it, but here's a picture from my door:

I opened the door before bed and 300 mosquitoes flew into the room. I killed as many as I could, but when I woke up there were blood spots on the sheets from where the mosquitoes feasted on me, and I rolled over on them or whatever. It was gross.