For the past several years I've been able to shake free for a week or two in the summer to take an extended motorcycle trip. This year I was able to take two full weeks. I have a cool wife who doesn't mind (sometimes I almost get the feeling she's eager for me to leave?), and I have the time off from work, and my health, so I'm lucky.

The last couple years I've met up with my Dad so we could ride together, but this year our schedules didn't work out. So, I was free to put on more miles than he likes. I dipped into the bucket list, and pulled out a trip to the Rocky Mountains. Glacier, Banff, Jasper and Yellowstone. The Bighorns, the Black Hills and the Badlands.

I'd go solo. No one to compromise with that way, and no one to blame but myself if I stopped having fun. I would drive a fellow rider crazy anyways with my constant and random stopping and too frequent U-turns.

It was going to be more miles and more heavily scheduled than I usually like. But, I decided to try and pack in more parks and get pretty far north in Canada. So I'd be driving past some stuff without time to explore. And since I'd be in national parks I needed to reserve campsites, so there wouldn't be too much room to wing it and follow last-minute impulses.

I followed the plans pretty closely. It ended up being a 5,127 mile trip over 15 days. Some struggles and some awesome moments, somewhere between an Adventure and a Vacation, but either way, definitely worth doing. 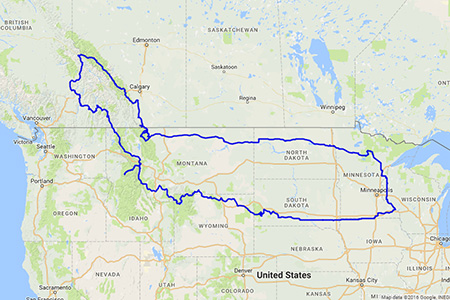 I was going to grind out three days to Glacier, then take a full day to explore it. The more miles I packed in on the first two days the earlier I'd get to Glacier on Day 3, and more time to play.

I totally re-wrote my Day 1 plans the day before I left. Looking at maps with a buddy and co-worker I realized I wouldn't add too many miles if I just shot straight north into north-country, instead of weaving south of the Twin Cities and over to Fargo. And he had a good road recommendation north of Grand Rapids, and a campground and restaurant recommendation in Grand Forks.

It turned into a fairly smooth 529 mile day: 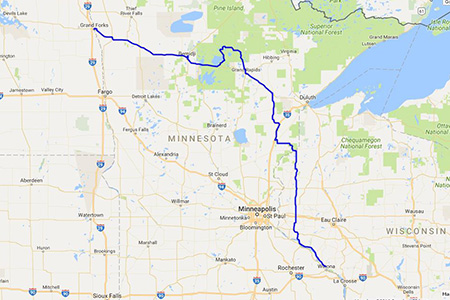 The day started perfect. Blue skies, cool air and a breeze off Lake Pepin. I rode up the river, and didn't get too far before my first stop. There's a little bakery in Maiden Rock I always meant to stop on, so I got a cup of coffee and a muffin and a sandwich for later. 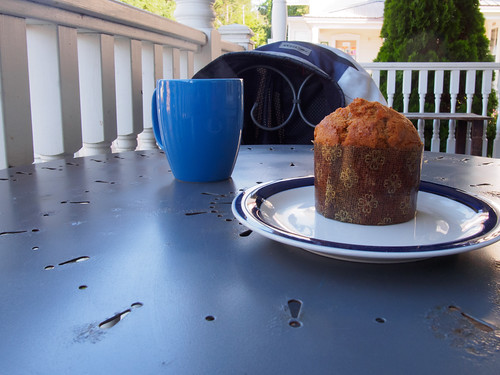 Back on the road, I was thinking it's not often the air is this cool and this humid. Then ahead, I could see clouds on the horizon. Then, it started raining. This would be a theme of the first half of the trip. I looked at the radar and the showers were pretty scattered, so I just got wet. But each and every shower found me, and by lunchtime was soaked.

I stopped to take a picture of this cairn, they were all over the place marking property boundaries.

A tiny bit of drama on Day 1: I was cruising through an Indian reservation in the rain on a minor back road, bothering no one and no one bothering me, and all of a sudden something was in front of me out of the ditch. I hit the brakes hard enough that I slid into the tank pretty hard, ouch. And as I scrubbed off speed trying not to hit the damn thing, I realized there was a wide fan of white feathers just forward and to the right of my front tire. It was a freaking Bald Eagle. When I got stopped and it got away, I realized that if I had thought about it, and was a tad evil, I could have just eased off the brakes just a bit and hit it. And would have had some awesome pictures of a downed Bald Eagle. But I would never do that, even if I had thought of it in time. Really. Honestly.

I doubled back and there was this swamp by where it had come up, with eagles and vultures sitting in these dead trees in the misty drizzle. It was spooky, probably spiritual. I moved on before the spirits got me.

By Grand Rapids I was dry again and the sky was blue. I grabbed Rt 38 north. A totally optional out-of-the-way side trip, but my buddy told me it was a really fun road that his wife hated because it made her seasick. At first I was disappointed, but then I got into the National Forest. It turned into one of those small, pretty-smooth roads that jogs and weaves around all the little lakes in the forest. Twisty and fun and totally worth it.

I found my way to Bemidji. I work at a state university, Winona State. Bemidji State is a sister university I've never seen, so I wanted a visit. It's a small and nice campus. Behind it is a lake and Diamond Point Park, a beautiful park with Adirondack chairs and a cool breeze off the lake. It was late afternoon and I was a bit tired. But a sit in a proper chair with the lake breeze and blue skies and the sandwich I bought in the morning was completely refreshing. Renewed, I put in my earphones and a book-on-tape and made the boring run to Grand Forks. 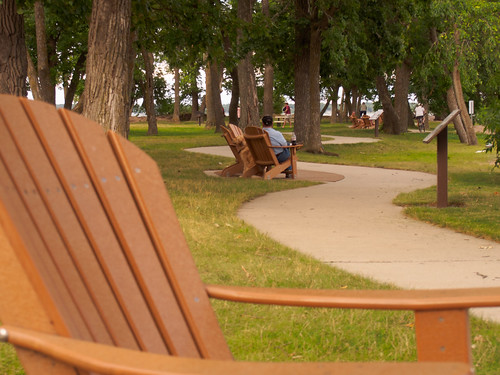 At East Grand Forks I found a campsite at the Red River State Recreation Area. This used to be a neighborhood that got flooded by that river one-too-many times. So they removed the homes and made it a campground. It's kinda cool with the grass lawns and city streets and no houses. 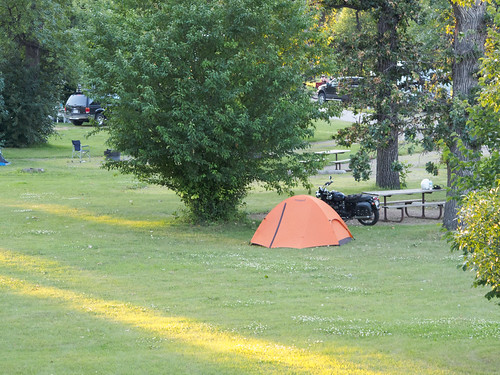 I set up and wandered over the the Blue Moose, a restaurant/bar right next door. Highly Recommended. I ordered what I order when it's not a martini place: double Tanqueray on the rocks with a lime and just a splash of tonic. Two of those, a salad, some sweet potato chips and some awesome high-quality barely-cooked tuna slices just put me in the most excellent mood. I sat there messing with my phone and camera happy as a clam.

This was the deal for the trip. I camped several nights, maybe five or six? But I never took out my camp stove. I never setup a clothes line. I slept outside but ate and drank at restaurants or from whatever I bought up-the-street. No complaints there.