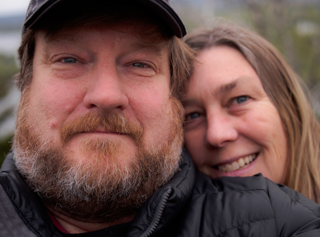 I live by the Upper Mississippi River in Fountain City, WI which is in the Driftless Region, an area of land never glaciated. We have rolling hills and "coulees" and forests and green pastures. I ride my motorcycles around this land, and farther out, and take a bunch of pictures. I make bread and pasta and tortillas in the kitchen, and I work in IT at Winona State University with my wife who is a Biology professor there. I was a Cub Scout and Boy Scout leader and served on the local School Board for many years. But now the kids are grown, and I'm enjoying the quiet.

This site is to share pictures and descriptions of my motorcycle rides, in hope that they inspire others to travel. And here I share some IT things I've figured out along the way, in hopes they help someone else.

Back in 2006, Yahoo! wouldn't allow my Mom or I to create a username with our last name in it. Because "Callahan" has "Allah" right in the middle of it, of course. I sent a note about it to The Register who published an article which was picked up by the AP, and then it was everywhere. CNN and Fox News, all the papers including articles in foreign languages. It was quite a deal for 15 minutes: Articles.

I had a shock jock team call the house unannouced at the crack of dawn. I did a call in for another morning show. But the best was being recognized by a young lady selling us a couch at the furniture store. When I told her my name she said, and I'm not lying: "I work at Dave's Guitar and I met Eric Clapton there. And now I've met you. I've met two famous people!". My wife just shook her head, knowing she would be hearing this story for the rest of her life. Yup, me and Eric Clapton.

On July 14, 2004 the Senate voted on a proposed consitutional ammendment that would ban gay marriage. I had a Letter to the Editor in the New York Times that day, in the very upper right of the Opinion page with threee others. The measure failed, and now it's hard for me to believe gay marriage was ever a debate. I'm proud of the letter, to be honest, and I have it framed in my house. 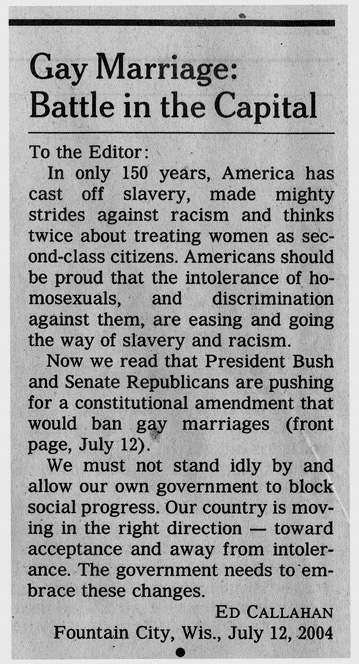 In only 150 years, America has cast off slavery, made mighty strides against racism and thinks twice about treating women as second-class citizens. Americans should be proud that the intolerance of homosexuals, and discrimination against them, are easing and going the way of slavery and racism.

Now we read that President Bush and Senate Republicans are pushing for a constitutional amendment that would ban gay marriages (front page, July 12).

We must not stand idly by and allow our own government to block social progress. Our country is moving in the right direction -- toward acceptance and away from intolerance. The government needs to embrace these changes.