This trip was a success, pretty much everything I wanted it to be. 2,500 miles in 9 days, with lots of stops and hikes and leisure time. Weather was way above average, if a bit wet and a bit cold at times. I only dropped the bike just once, and there was little damage from that, and even that was temporary. I reached the limits of my riding capabilities at one point, but got to some pretty remote and awesome destinations.

My intent was to leave Friday morning and have a full 10 days on the road. I only had to go roughly 2,500 miles so that was more than enough time. I wanted time to explore, and get off the bike a lot. My first day out I met a cool dude who puts tons of miles on his Yamaha cruiser. He said he goes around Superior at least once a year, and he can do it in 2 or 3 days. That is not the vacation I wanted.

But my clutch went out a couple weeks before the trip, and the bike needed new chain and sprockets and tires and few other maintenance items before I left. And we were hosting company the preceding weekend, and I had some evening meetings, etc. In short, it was a busy time of life. I was committed to staying laid back and not making my family miserable with my stress. I was in my shop pretty much every spare moment working on the bike. In the end, I delayed departure for a day just to keep the stress down. And that worked. 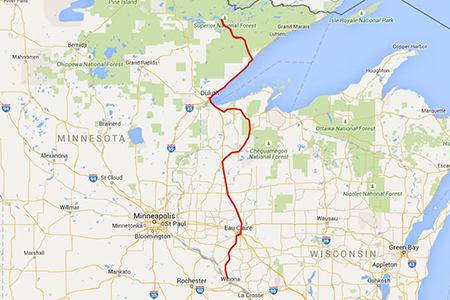 So I got going Saturday morning, around 10 I think. I slept in, Kim made me breakfast and I did the final preps. I was either not prepared or a free spirit, not sure which, but after my first night I really only had rough ideas where I might camp. But the first day was meant to be a bit of a grind just to get up north, and I had a campsite reserved.

A stop at the Delta Diner only added 40 miles to the day, and I judged that worth it.

Then a pretty straight run up to camp, not much for stops. There was just a line of railway cars along Rt 53 south of Spooner, so I stopped to take a look and snapped a picture or two. Did some googling about this one. This had been a diner car in Virginia at some resort. When they put it out-of-business in 2012 the car went up for sale, apparently for $179,000:

Built in 1913 by St. Louis Car Co. for the Southern Traction Co. In 1917 Southern Traction Co was purchased by Texas Electric who went out of business in 1948 and #316 was sold into private ownership and used as a cabin on a ranch near Ft. Worth Texas. Restored by current owner into a self propelled (diesel engine) dining/parlor car. This car is in complete operating condition and CAN be operated on any active rail line. Since it was originally built as a rail car the FRA has given the car approval to operate on active rail lines, if you are interested in purchasing this car we highly recommend that you talk with your local FRA representative to confirm that they will let the car operate on your line. Some of the mechanical details include: Kabota 40 KW diesel generator (for lights & HVAC), 158 HP Duetz 6 cylinder engine (for propulsion), Hydraulic chain drive transmission, ABDW brake valves, seats 30 passengers at tables (dining room can also be used as a lounge/parlor), electric base board heat, air conditioning, 100 gal water tank, RV style toilet with 30 gal holding tank, stereo system, 60' long, 65,000 lbs, dead man control, ditch lights, friction bearings, roto chamber style brake cylinders, good wheels. This car is in FULL operating condition and ready for service.

Not sure how interesting that is to you. From Texas to Virginia to the side-of-the-road in Wisconsin. Car has had a long life.

There are these three little stone buildings along main street in Poplar, WI. Wish I knew their story: 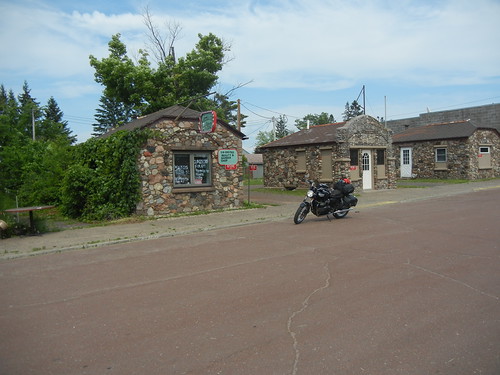 Then up the shore: 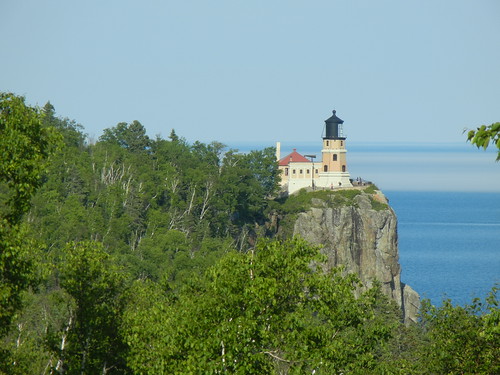 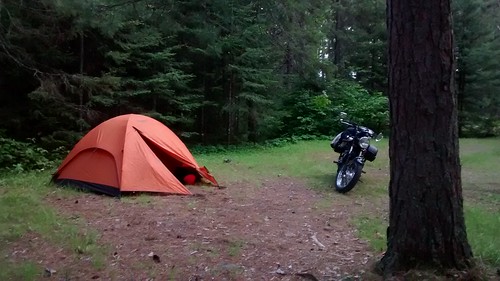 After I set up I took a ride up to Ely on Rt 1. That used to be about the greatest motorcycle road in the state. Lots of tight turns, one on top of the next. But they widened and straightened the road a couple years ago. It's still a nice road, but that perfect road is gone to history now.

Weather was perfect all day, and I hadn't given it a thought that it might change. But when I got up to Ely, the sky to the west was pitch black and ominous. It kinda filled me with dread for a second there, like evil forces were descending. I ducked into Dairy Queen for a quick burger (the antidote to evil forces), and when I came out the black was overhead and the wind was blowing hard. I rode back to camp in the pouring rain and pitch black, tucked in behind a car when I could a couple times, watching for critters the best I could. But I made it to camp and turned in, and slept to the sound of rain on my tent.