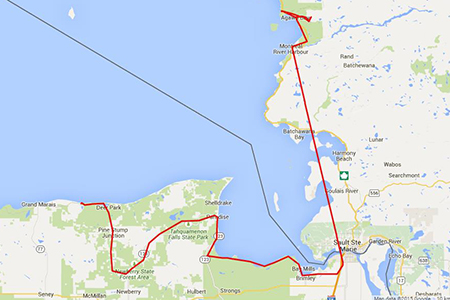 Day 6 I got back into the US. My GPS thing stopped recording a while, so my route was not as direct as the picture suggests.

I got an early start and backtracked up to Agawa Bay to see the petroglyphs. I had the place to myself, the parking lot was empty. I signed in and took the short hike down to the lake:

The petroglyphs were pretty cool though. I guess they are really not petroglyphs technically, they are paintings. The say they know the island where the red clay that was used in the ink was found. 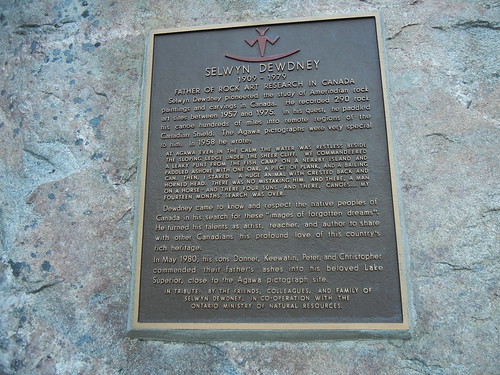 Selwyn Dewdney pioneered the study of Amerindian rock paintings and carvings in Canada. He recorded 290 rock art sites' between 1957 and -1975. IN his quest, he paddled his canoe hundreds of miles into remote regions of the Canadian Shield: The Agawa pictographs were very special

AT AGAWA EVEN IN THE CALM WATER WAS RESTLESS BESIDE THE SLOPING LEDGE UNDER THE SHEER CLIFF. WE COMMANDEERED A LEAKY PUNT FROM THE FISH CAMP ON A NEARBY ISLAND AND PADDLED ASHORE WITH ONE OAR, A PIECE OF PLANK, AND A BAILING CAN. THEN, I STARED. A HUGE ANIMAL WITH CRESTED BACK AND HORNED HEAD. THERE WAS NO MISTAKING HIM. AND THERE, A MAN ON A HORSE. AND THERE FOUR SUNS - AND THERE, CANOES... MY FOURTEEN MONTHS' SEARCH WAS OVER.

Dewdney came to know and respect the native peoples of Canada in his search for these "images of forgotten dreams". He turned his talents as artist, teacher, and author to share with other Canadians-his profound love of this country's rich heritage.

In May 1990, his sons Donner, Keewatin, Peter, and Christopher commended their fathers' ashes into his beloved Lake Superior close to the Agawa pictograph site.

And there's a lot more down there than that.

I was more comfortable once I got off that ledge, then the short walk to the bike and back on the road.

Back on the hardtop I almost immediately explored a side road, pretty much a logging road.

Held back by an old railroad track

A Frater House is another word for a rectory apparently, but this one is on the Algoma Central Railway and was a "section house". A place on a section of railroad the railroad company built to house workers and supplies. If my google-foo didn't fail me.

I climbed to the top and was rewarded with an ugly clear cut but a great view.

I made my way back to pavement, and back to the campground to refill my water bottles. Check out how much I saw and I hadn't gotten anywhere yet.

There was an uber-cool truck pulling a camper 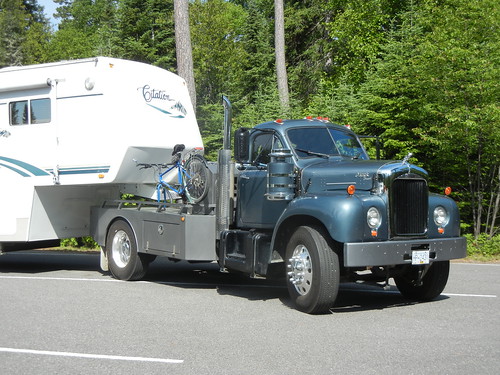 Then down the road to make some miles, except, wait, breakfast! Biggest problem with this trip was a scarcity of breakfast diners. There was a sign on the road promising breakfast, so I took the turn into a campground. Which had a shack, that was locked.

But this guy comes running out and unlocks it. He cooked me breakfast (two eggs over easy, bacon, potatoes, toast and coffee, of course) while I waited. First in uncomfortable silence, but eventually into comfortable conversation.

Then a pretty ride down to Pancake Bay, ran into one cool travel vehicle. Diametrically opposite of mine:

From Pancake Bay to Sault Ste Marie is just plain and boring bordering on ugly. I blew through it, got through customs without an issue (they barely talk to me anymore, I think I'm on a "don't worry, he's cool" list now or something) and over to Whitefish Bay.

I had some exploring of the UP planned, but I was behind schedule. I cut out a planned ride up to Whitefish Point and made miles to one of my favorite campsites. I had to take some roads that were sandier than I liked, but unfortunately not the sandiest I'd be riding the following day: 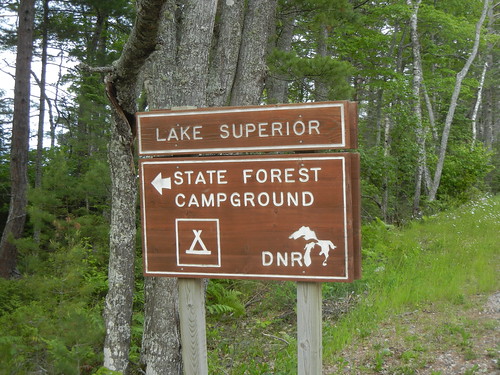 Then enjoy the beach:

This is my cooking kit:

And to bed. One of my best night's sleep of the trip with a soft warm humid breeze coming off the lake.