Day 2 was a pretty straightforward, and straight road, day blasting through North Dakota and into Montana on Rt. 2. A bit over 500 miles by the time I was done.

I stopped at the Grand Forks Air Force Base so see if I could spy any drones or something. Nothing in the air, but they had some display pieces out front: 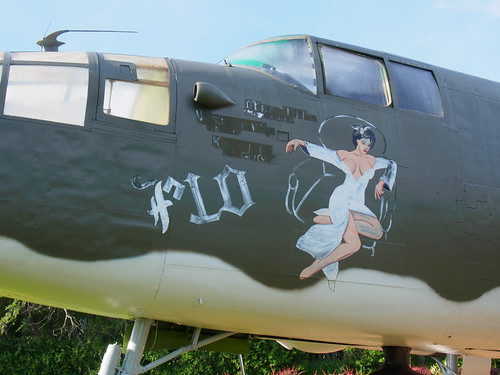 B52 is bigger than a motorcycle, it's not just an optical illusion:

Hound Dog cruise missile launched from the B-52

I rode around the base fence line a bit, looking for sights to see. I took this little back road and almost lost it in this really slimy mud. Later I will have wished I had learned from that experience. But it was on my boot and foot peg and my foot kept sliding off. I may need different pegs one day with a bit more grip.

The ride was straight forward. I just listened to my earbuds most of the day. I'd go as fast as the bike would let me. With the Heidenau Scouts it got a bit squirrely around 80 mph, especially if I was in the turbulence from a truck or something. The bike would start this weave, the first little hints of a tank-slapper. So I'd ease off the throttle a bit.

It wasn't ugly, there were prairie potholes about, and some roll to the land. 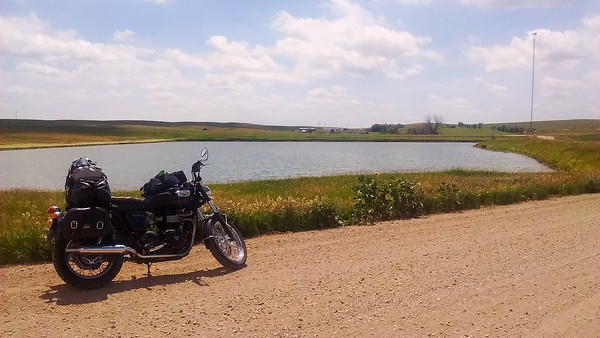 Minot was a drag. You know, farmers and ranchers build communities. They will pass their land on to their kids most likely, and the operation will go on for generations. They are invested in the land and the community. The oil guys in Minot and the like are in it to take what they can and leave. Money for money's sake. No need to build anything to last, no need for aesthetics, just suck what you can out of the land and people and move on. Every man for themselves, no allegiance to anyone. The crappy barracks that are built here-and-there to house the workers look a nightmare. I was happy enough to get out of there.

The land just to the west of Minot on Rt 2 is looks that is was really pretty at one time, lots of topography from river action. Kinda spoiled with roads and scattered houses now.

I made it to Glasgow, MT. It was hot and the day was long, I grabbed a motel room. A couple beers and a Subway sandwich. Hung my tent up in the shower, it was soaked with dew when I packed it. 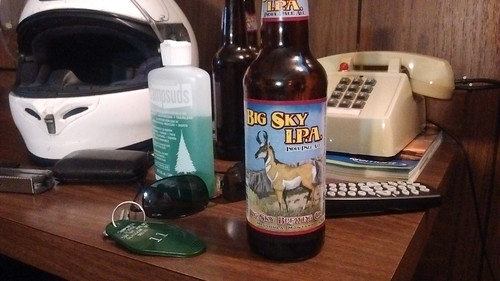 I heard a bit of noise and opened the door and got pelted by wind and sand. A huge thunderstorm was rolling through. Lightning and thunder banging. I pulled the bike under the eaves of the building and enjoyed the show. Afterward I walked around town to view the aftermath. It was horrific. Well, a bit less than horrific, but some flowerpots did get knocked over.

To fully appreciate the Rockies, I think it's necessary to spend a few days crossing the flatlands to get perspective.