Next morning I was up way early. This whole trip I was in the tent early and up early. I didn't do the campfire thing, just turned in when it got dark.

I took my camp soap to the lake and waded way out there. I washed as I watched the sun come up. There were clouds, and they whole sky changed by the minute, it was really cool.

Got me a nice breakfast in a proper east coast diner. No tables, just a big counter, full of locals talking to each other. And a way cute waitress:

Then, I had some time to really explore the Adirondacks and I ran down some back roads with little plan except to turn where it looked interesting. I got some perfect freaking road, and then it got broken up a bit: 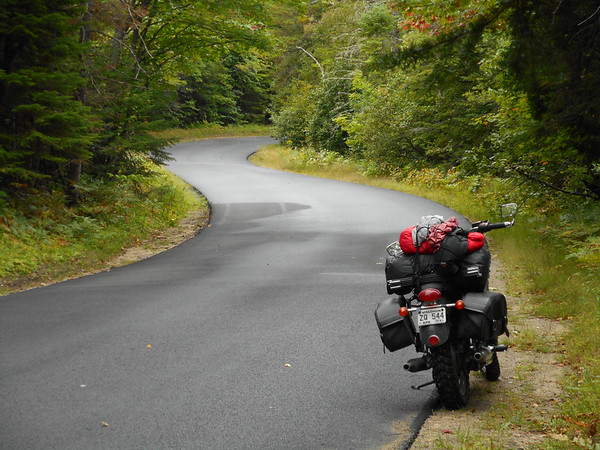 ^^^ Honestly, what is better than that? And there was miles and miles of it.

Then it started misting, and I decided not to worry. Just get wet then dry out. Then it misted harder. Then I was soaked. Then I realized I was socked in, and there would be no drying out.

So I ended up unpacking and digging out dry clothes and warming up and drying out at a gas station. Then I trudged along in the pouring rain. I was in the Adirondacks, but could see absolutely nothing. But the road was good and curvy, so I had that to enjoy.

This is all of the mountains I saw, and 60 seconds later it was gone again into the clouds.

I made it to the hotel my dad was at cold, wet and tired. But soon we were at an Italian restaurant drinking martinis and eating comfort food and life was good.

My theory is this. You chose to ride a motorcycle. It is optional. And you knew you were going to run into bad weather, it is going to happen.

So, if you choose that and it gets rough, you are a complete looser if you complain or get in the dumps. You have no one to blame but yourself.

So, be a man, find the best part of the day and smile about it. Cause it beats the hell out of being at work, and you are on the road in charge of your own destiny. So enjoy god damn it.

So, I was riding with Dad now:

We rode over the Watkins Glen State Park, found our cabin: 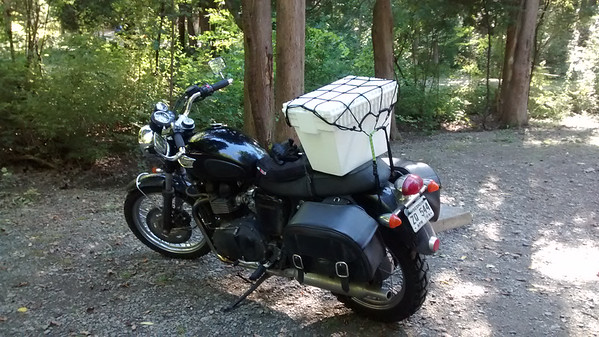 And got to work:

Day 11 At The Speedway and Some Exploring

Dad had a pinched nerve in his neck, or something. But he was getting neck pain that prevented many miles. And honestly, the riding around the Finger Lakes isn't that great. Some decent views, but the roads are too straight and there are too many cars. And how many wineries is too many wineries? Especially when you're riding and can't drink.

But, the first morning after breakfast we headed over the the racetrack. We got in for free and had open access. We wandered around the paddocks. A club track day and driver school was going on.

Then a bit of riding. Here is what Dad looks like:

Yup, Dad is cool. He's just a few years over 70 now and in good shape. When he visits my place we ride a lot together, him on wife's mag-wheel Bonnie. We ride at a reasonable speed on the straights and pick up the speed for the corners. We don't ride in a risky way, but still in a way that leaves you worn out when you're done.

But, leading up to this trip Dad was making noise about not wanting to ride very many miles. And needing to practice on his new bike before we got together. He bought a 2007 T-100 after our ride last year in Vermont.

That was making me nervous. Maybe his age was getting to the point that the days of hard corner riding were coming to an end. No worries, I can slow down. Age happens.

So, at one point he and I trade bikes for a little bit. His is stock, I think the original tires are still on it. Mine has the thrux-length rear shocks and OEM sized 50/50 dual sport tires. Even though they are OEM size on the sidewall, I think they are bigger and the profile is different. Still I didn't expect the handling of the two bikes to be very different.

But my gawd, first corner on his bike I totally blew. The damn thing would not turn! It refused to counter-steer, it wouldn't lean at all. It was like a hand was pushing me up when I tried to get it down. I ended up turning into a corner like I would a car. It was horrible. I thought my Dad was going to get off my bike realizing his was broken.

But no, Dad thought my bike was unpredictable and overly sensitive. He felt like the rear steps-out in a corner. I know what he's talking about, it's a good thing once you're used to it though.

Dad put some new tires on the bike right after the trip, Roadriders. We had noticed some scary cracks in his front, he should have changed them right away when he bought the bike being the tires are like 7 years old. With the new tires, he can't believe how different the bike handles now.

He and I have figured out our father-son dynamics and really enjoy spending a few days together. We adjust to each other's quirks well and have the common love of sitting at a picnic table with a martini and bullshitting. Doing that with him is some most excellent time.