Day 4 was Monday, Labor Day. It was a 274 mile day. Went to the end of the GunflintTrail and the Arrowhead Trail. These haven't been high mileage days, but riding the dirt roads takes longer and .... hey, wait, I don't have to justify that!

Riding on Labor Day weekend made the Superior shore less pleasant because of all the humans, which was fine because my plan was to stay up in the forest anyways. But, I had been looking forward to hanging in Grand Marais and had been driven out by the crowd. Apparently, Monday everyone headed home. Town was relatively peaceful. I got a cup of coffee and a breakfast sandwich at the Java Moose and sat on the deck, and took advantage of their wireless:

Nice and relaxing. Then I headed up the Gunflint

Plan was to get to the end, and make stops to explore on the way back. That was fine, but in the future I won't delay stopping when I feel like it for later. A goose in the bottle is worth a gander in ... oh, whatever that is.

But I did stop at Trail Center for breakfast

This place is known for it's giant pancakes, which are giant. But this was second breakfast, and I wanted wild rice in scrambled eggs with cheese, and a side of ham. And that's what I got, it was awesome. Then I ran non-stop to the end of the trail. There's a USFS campsite out there which was beautiful, and another cafe. I only narrowly averted Third Breakfast.

The campground and had lots of empty spots available. I got off and walked around and explored a bit. The back of the place had site right on a nice lake:

The second half of the Gunflint has topography like nothing else I saw on the trip. Very open, and lots of exposed rock. Clearly there had been recent wild fires here, and probably always has been.

I wimped out on riding up this road to the top of a small hill for a view. Too big a chance of having to brake halfway up, and stopping on rough surface while pointing up a hill is a tough spot to be in. Especially when the wheels are locked and you start sliding back. Get your adrenaline going it will, done that. Decided not to do that today.

Here are some educational signs:

I guess it is far enough from services that they have places setup for copters to land to pick up injured folks and such.

Wide open land, lot's of quiet. No sounds of traffic, nothing.

Yet, I had a tendency to be in a hurry. At some point PopPop had wondered online where he should ride. I had replied "Just avoid the feeling that your trying to get somewhere, and enjoy where you are. That's my plan." It was a plan I was struggling to keep though.

When I got to Rt 61 I headed north to Grand Portage. I went to the museum first, but they said they were closing in 20 minutes and I should really head down to the monument because there was more to see there. That was nice of them. So I rushed down to the monument, a replica fort.

I rushed into the fort, quite a bit road weary. I went out onto a back porch, and sitting there was a couple who worked there, in period costume. They looked up at me, not totally happy to see another tourist, and said they were just enjoying their last 15 minutes on the job. It was their last day. They started to get up to entertain me, and I said "please don't get up".

I plopped next to them and we chatted, just looking over the lake. About traveling, about enjoying where you are, about where we grew up. About nothing. It was so relaxing, I left a new man, renewed.

Then down to Grand Marais. I changed into a bathing suit in the porta-potties behind the Coast Guard station, took a bath in the lake and changed back. It was cold, but refreshing. Then some dinner, and I brought snacks back to camp.

Last day was a short side trip up Hwy 1, a pit stop in Duluth then a fast run home. 399 miles.

Stopped at Aerostich, but didn't buy anything. They are very expensive. Chatted with some ADV types out front, which was cool. These ADV guys all seem to have a lot of free time and disposable income, not many guys with kids in the house amongst them. But I may become one of them one day.

Then across the lift bridge, to run to the end of the strand, just because.

There's an airport down there. I was just looking at a plane coming in, and a fellow rider came off the tarmac to say hi and talk bikes. He brought me in to look at the planes. I was there a couple hours. These guys have lots of time to chat, and know how to enjoy their time. 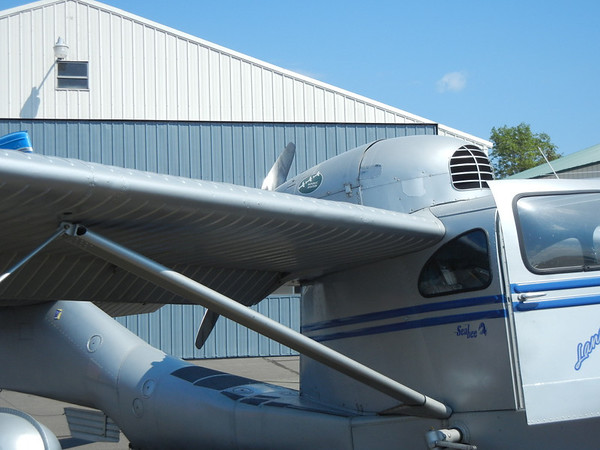 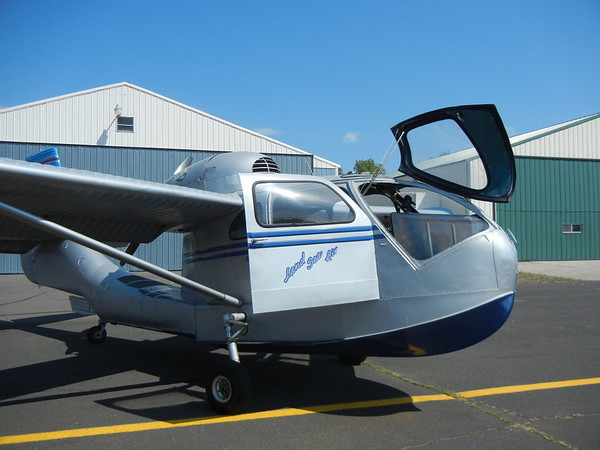 This guy was a crack up. He had just bought this BMW used. Oh, it was great a great ride for when he's in Afganistan. Oh, you can see the bullet holes from a recent trip. Oh, that extra fuel capacity is helpful in the desert. Totally ripping on the fact that he had no intention of using the bike for what it was designed for. (Not that many do.) Cracked me up. 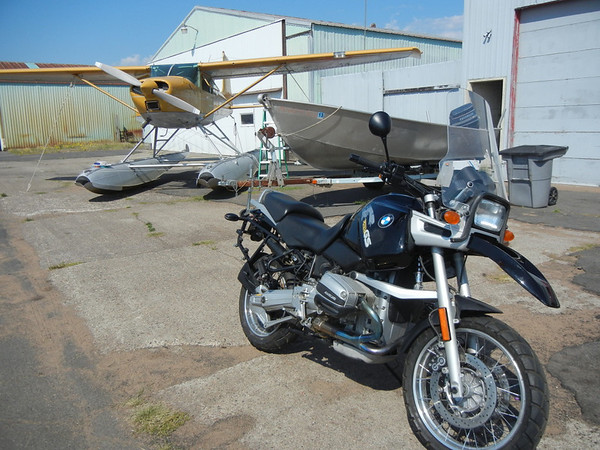 Some of the best riding was within 40 miles of my house, down Rt 88 to home:

It was a good trip. Saw lots of land I hadn't seen before, met some good folks, got some good meals in.