Day 5 A Wet Day with Waterfalls

Day 5 was the Wet Day. 284 miles through Tahquamenon Falls, to Lake Michigan to a motel room in Gladstone, MI.

I had left my bike back at Pat and Lindsay's campsite, I was boozed up enough that I figured I didn't need to be riding it around the campground in the dark. I walked to my campsite, and then realized I had left my flashlights, etc, on my bike. But, I had everything laid out so I just fell into my bag and slept, no worries.

But, right as the sun broke I awoke to the sounds of thunder. So I scampered back and got my bike, secured everything and made it back into my tent before the rain came. It poured, but not for that long. When it was done, I packed up my gear and my wet tent and hit the road.

It was done raining so I didn't wear my rain gear. The road was wet, but I figured my pants would dry out quick enough. Well, I wear these kevlar liners under my pants, and they got soaked and then pulled all that water down into my waterproof boots. So, lesson learned. Wish I had put on my rain pants.

On the way to Grand Marais I stopped at Log Slide to take in the view.

At Log Slide I could see another big-old thunder cell heading my way. So, I figured I'd out-smart mother nature and ride out the storm over breakfast in Grand Marais. So, I ran over there and had a plate of whitefish and eggs:

I came out, and it hadn't rained. I went over to the hardware store and bought a new turn signal bulb and nut/bolt and did quick repairs on my bike and mess kit. Still no rain. So, I packed up and headed south on Rt 77. One mile down the road: Rain. Lots. So, I pulled a u-turn and found shelter. 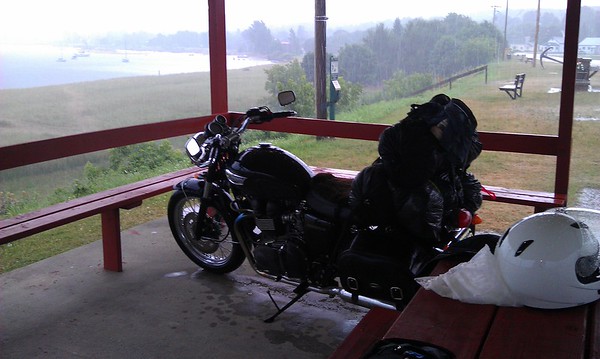 Now I was plenty wet, and I didn't want to put on a rain suit over wet clothes. I was also pretty tired. A late night around the campfire the night previous hadn't left me much time for sleep, and the preceding nights on hard ground hadn't left that well rested either. And it wasn't warm.

That probably makes it sound worse that it was. I was still riding solo in the UP on my bike, and pretty free. I just had to be a bit more intentional about maintaining my mood.

So, I worked my way over to Upper Tahquamenon Falls. There were lots of people there. It's a state park facility, but there was also a brew pub there and souvenier shops. I bought a hot dog and a cup of coffee, and really questioned my no-beer-while-riding rule, because the brew pub sounded awefully good.

Then I walked down to check out the falls.

I dig the "Dog Water" note and arrow on the bottom of the sign. This was done by a Good Person.

From there I ran down to Rt 2 on Lake Michigan, and to the Cut River Bridge. The bridge has a picnic area, and the sun was out now. Bright blue sky and nice warm temps. I put up a clothes line to dry out my tent and clothes, and took a walk. It was glorious.

Brandi and her Harley gang

I got dressed again. I had stuffed my boots with newspaper so they dried pretty good, and my socks and liners were dry. I felt pretty darn good. I had been planning on spending the night in a hotel, and Kim had looked and told me by phone there were plenty of rooms in Escanaba. But, now that I and the tent was dry, I was leaning towards camping another night. It was going to be my last night on the road.

Across the street I heard loud pipes, and squealing tires. Then I heard them cross the street and park in the area behind me. I didn't turn around, I didn't make eye contact. Every HD rider I've chatted with has been cool. Doesn't matter how much they dress the part or what they're riding, they tend to respect the Bonneville and are good for a chat. It was the squealing of tires that made me suspect I didn't want to deal with this group.

But, sure enough young pirate walks over and chats me up. He was fine, and friendly, but I'm pretty sure he thought we was an actor in some B level biker movie. He asked if I were a cop, and satisfied with the answer, proceeded to roll and smoke a joint. I told him I didn't even drink a beer while riding, which he seemed to think was odd. He asked if I had to wear a helmet in Wisconsin. I said no, but I do anyways. That, too, seemed to seem odd to the dude.

They were headed to Sturgis, of course. His friends came over as well. Young little Brandi (who sells Harleys), and older slightly-creepy guy and a war vet recently back from Afghanistan. He was a young skinny ex-Marine, who asked lots of questions and didn't really have time to focus on the answers. A recent dose of speed would have explained his behaviour, but I don't know.

But for all that, they were friendly and respectful. They were doing their own thing, and really didn't care that I was doing my own thing. It was all good.

So, back on the road. I could see way down the coastline what I though was probably my campsite for the night. It was on a peninsula into Lake Michigan by Fayette State Park. And, it was under a thunder cell. There were thunder cells everywhere to the west, where I was going.

So, I stopped and had a Pastie. This seemed a correct response at the time. I sat on the deck overlooking the lake, and chatted with a father/daughter on vacation. Very nice.

From there, I decided to make time to Escanaba and enjoy the warmth and comfort of a hotel-room bed. Back at home Kim did some research for me and let me know what the cheapest but highest rated hotels in Escanaba were, Super 8s and Days Inns and all of that.

I got my rain gear on, and riding though the rain was dry, comfortable and kinda fun. I'll put it on earlier next time.

A few miles from Escanaba I explored Gladstone, which was a nice little town on the lake. And I spotted a little motel on the edge of downtown, and immediately knew that a chain hotel would have been a mistake. Got a room for a mere $50.

Once settled, I wandered downtown. A local bar sold me three road beers, and I got a half pound of boneless wings at the local pizza place. I enjoyed them and the wireless internet sitting outside my motel room as the sun set. There was nothing not to like about the experience.

Day 6 was the last day of the trip. I wanted to be home with my family, but I also could have spent a few more nights on the road. I wasn't really sick of camping or travelling yet.

I put on 451 miles, through Nicolet State Forest on the way. There was only one encounter with law enforcement, and a minor one at that.

After loading the bike I wandered downtown Gladstone again, and got pastries and coffee for breakfast. It was a bit difficult narrowing down my breakfast to two items.

From there I ran down the shore of Lake Michigan for a while. There was very little lake access, a lot of the shoreline was private property and houses. Lake Superior lake access had been the rule, not the exception.

Then, I was sad to have to cut inland and leave the Great Lakes. For now. I missed a turn somewhere and got a bit lost, which as it so often does, worked out just fine. I crossed back into Wisconsin at the Koss Bridge.

It was good to be back on the alphabet roads of Wisconsin. We identify our county roads by letter (Route J, Route CC, etc). And counties coordinate, and don't tend to change the road identifier at the county border (as they do in Minnesota, making it impossible to get anywhere without checking the map gazillions of times). I basically took Route M the entire width of the state, and then route H south. There were some other roads, but for many hours on this day all I had to look out for was signs for these two roads.

But, before I got on Route M I explored the Nicolet National Forest. I knew I had lots of miles to put on, but I figured I could ride into the night if needed. It was a nice day, and the moment needed to be enjoyed.

Nothing really stands out from the forest, just a generally pleasant area to ride and spend time in.

From there I made miles. I stopped to stretch my legs and take my helmet off from time-to-time, but I was generally pushing forward.

The guy who built those chainsaw totems was out by his truck when I stopped. He yelled out "You won't know if you don't stop". He gets it, a fellow fan of the U-Turn to check out that thing you just passed.

For instance, I turned around to check these out. What Are They???

They are at 45? 10' 7.56" N and 89? 0' 20.3" W, off Hwy 64 to the west of Polar, WI. They are right off the road, under a small powerline, not far from a residence. They are made of concrete. Some sort of bunker? There are actually three of them, the third is back in the trees. They have small concreted-over entrances, maybe two feet by two feet.

Made a stop at the Chippewa Moraine visitors center. It was getting late and I still had a lot of miles to do, but still, you have to stop and check things out or what's the point?

The Elk Mounds police officer felt like I was going faster than the speed limit. I felt like the speed limit was too low for the conditions. We agreed to disagree, but he wrote me a ticket anyways.

I explained to the officer that the tires still had plenty of grip at that speed, and I hadn't even scraped a peg. I was well under red line, and hadn't even shifted to fifth yet. But, he was intent on being hard to get along with.

Well, I had gone slow through town, and on the other side I took a corner expecting 55 mph county road on the other side. But there was more town, a city park. I think it was like a 49 in a 25 mph zone ticket. Those 25 mph zones will get you. Well, I had it coming, I had been passing pretty aggressively (but politely) the entire trip, it was bound to catch up with me eventually.

I made it home after dark somewhere around 9PM. The family was happy to have me back, but I really didn't get the impression they had missed me as much as you'd think.