Day 3 was about 400 miles. It started out rainy, and ended rainy, but in the middle of the day is was only cold. Like upper 40s to low 50s. I saw the sun at one point. The heated vest was a life saver.

By plan, it was a day to grind out some miles, but I planned a bit of a side trip on a small two lane.

Not a ton of views of Huron, but a few: 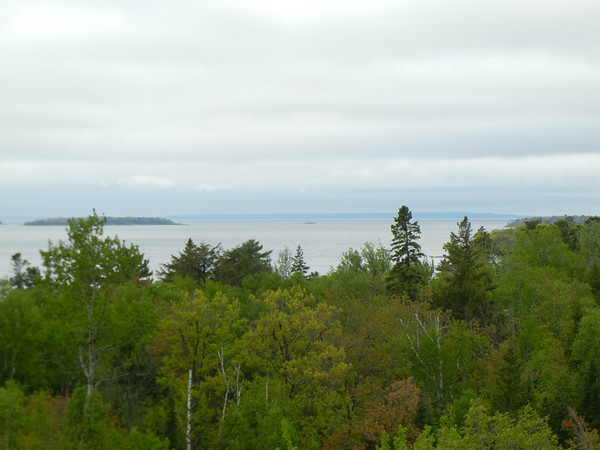 Plan was to camp at Kiosk in the Algonquin Provincial Park. In Sudbury I needed to decide whether to take the direct route, or take my planned detour down to the French River and then some minor roads, cutting south of Lake Nippising. Did I mention it was cold? And I was tired. And running late. And I missed the turn for French River and was heading for North Bay anyways. But frig it, the small roads are the best part, and I had setup a reward for myself for pounding pavement.

So down to French River, and onto those roads that form little dams likes a beaver damn does, and create all those cool wetlands: 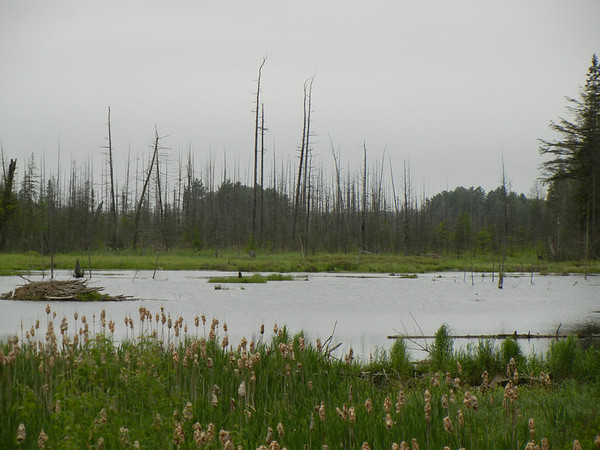 But, the rain set back in and I suited back up. Digging the camera out and using it in the rain is a pain, but one cool picture I passed up was a float plane landing strip a guy made in his field. No lake around, but he had a float plane and a gas pump for it, and he build a long rectangular pond in his field to land the plane in.

I got up to the main road up by North Bay, and the rain stopped. I got my gear off and refreshed. I took a self portrait: 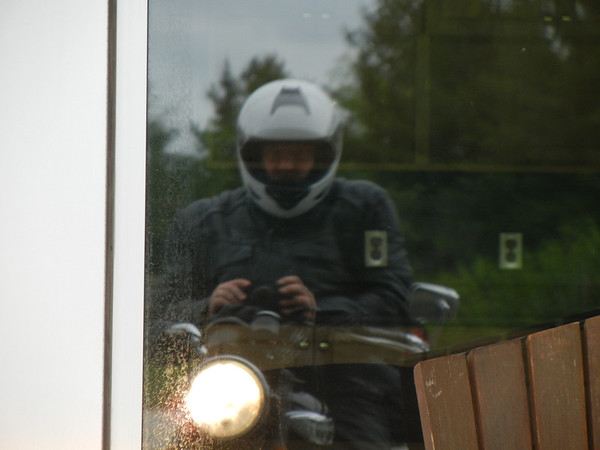 I didn't know what to do. I really wanted to camp, but I was run down. Wasn't sure of the rain situation. I chatted with a guy on a 1000 cc VStrom, I didn't know they made such a thing, and we chatted about bikes and travelling. He weighed in that I should motel it. Called wife, she weighed in that I motel it. I headed towards the campground, not sure either decision (motel vs campground) would be best. Nothing like being tired and cold to make you indecisive.

But when I got to the road to the campground the rain was back. So I rode to Mattawa for a motel room. I was indecisive about which motel to stay at.

I settled for one with an attached restaurant, so I could have a beer or two without riding. Room was overpriced and depressing and very old. The sheets and towels were white though, and it was clean.

The meal blew. I make better food in the microwave when slumming it. But I had beer. I tipped the girl anyways because it wasn't her fault. But the friggen place. He was charging what it would be worth if the owner kept it all up, and he couldn't lower the prices because he needed the money. But he couldn't afford upkeep. So fewer people were staying. What's he going to do, raise prices? A death spiral.

But maybe that's too harsh. Did I mention I was tired.

Bike was making a wierd noise all day. I pulled off the sprocket cover to make sure the front sprocket hadn't loosened. It was fine.

I told myself, just go to sleep. Tomorrow will be bring a new day. If you feel down then, we'll deal with it then. Knowing me, I probably lightened my flask a bit, then hit the sack.

Canada has odd signs. Most I could figure out.

The one indicating that pavement turns to gravel I tended to figure out right after I hit the gravel at 50 mph.

But what's this one?

Trucks falling from sky? Truck drivers, beware of falling into center of earth?

I really have no idea.

The next morning, what do you know, just like always, I felt better. Funny how that works.

Day 4 was a scheduled down day. Well, I had planned a 400 day on remote roads that would bring me back to the campsite. Then I decided that was too much, and had dialed that back to a 325 mile day. It would mean seeing less, which makes me feel like I might be missing something, but was more reasonable.

But, I wanted to establish camp. I just figured if I setup in the morning I could ride late if I wanted without worrying about it. So I decided just to chill and explore.

It turned into a very nice 250 mile day.

So, rode out to Kiosk. There were no other campers there. No one. I asked the ranger if tourist season hadn't started yet. She said, oh no, they've been full a couple weekends already. But ...

Oh oh. But I picked a site right on the lake with a pretty vicious breeze, well, wind. But it kept the bugs away, and they caused me no problem at all. Everyone might have been wrong anyways, bugs became a real problem more towards the end of the trip. 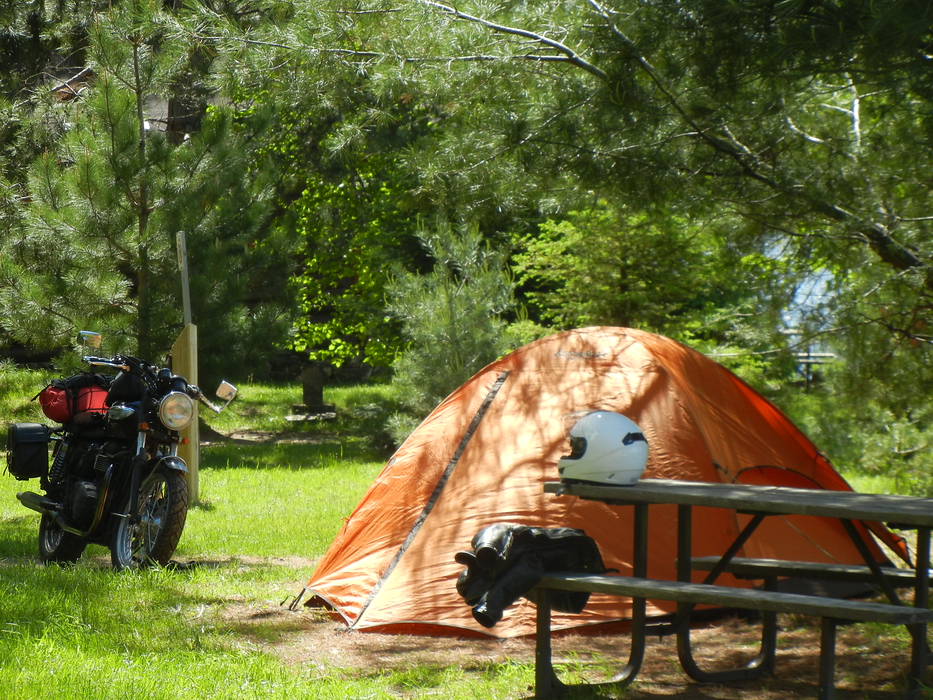 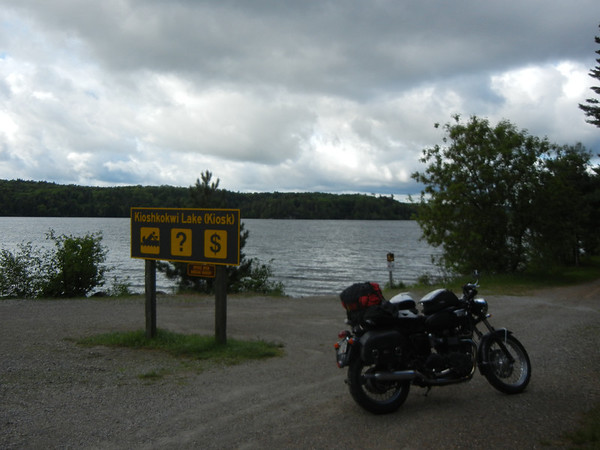 Then I had breakfast, and plotted the rest of my day. 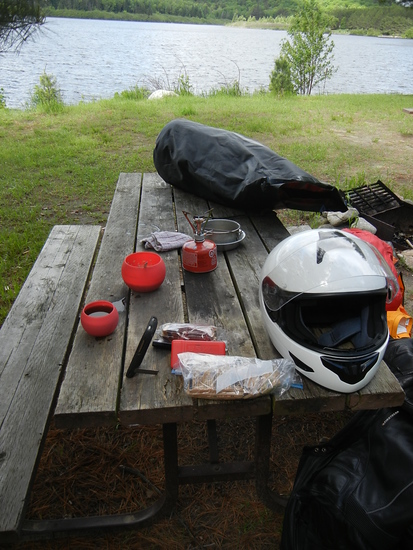 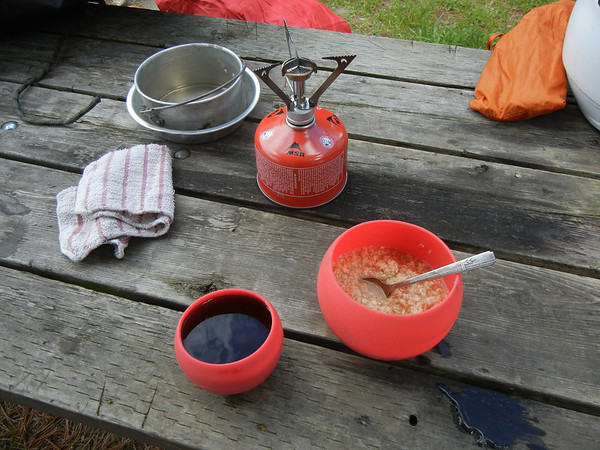 Back on the road, a road closed sign got my attention. There was a bridge out over the outflow from the Kiosk lake. This entire river flows through these two spillways. An awesome amount of water, I really didn't want to fall in.

Also, the sky was blue and it was hot enough to be in just a t-shirt. Awesome. 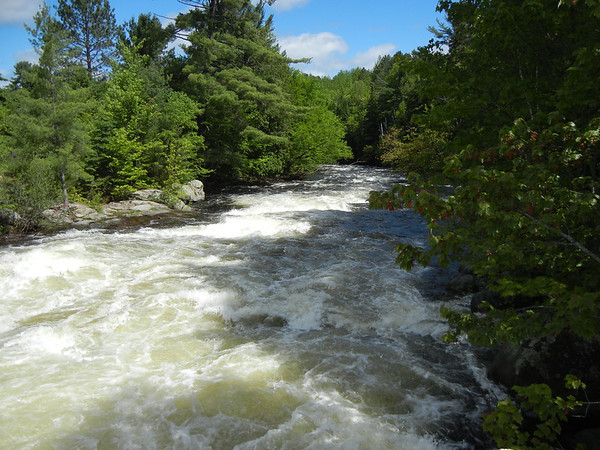 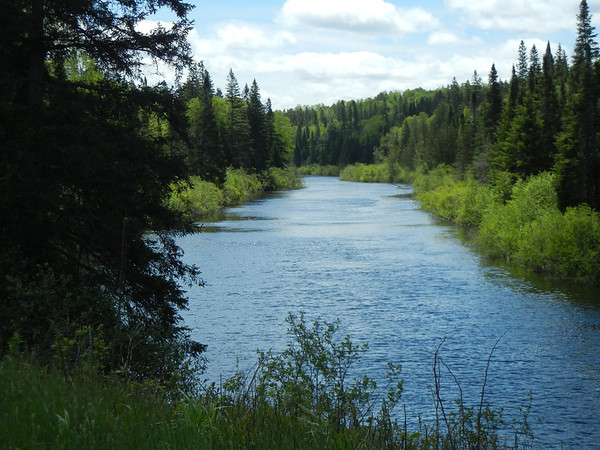 North Bay was a grind, too many people and too many cars. So, some chili and a sandwich at Tim Horton's and I headed north. A nice ride through the boreal forest

The Tim Horton's took it's revenge. I pulled off and took a short walk into the woods to take care of business. I heard a bit of a roar deeper into the woods, so I walked back there. There was a wonderful waterfall back there. Weird thing was, there were no trails back to it. No signs of visitors. I'd think a spot like this would attract all sorts or hikers and such. 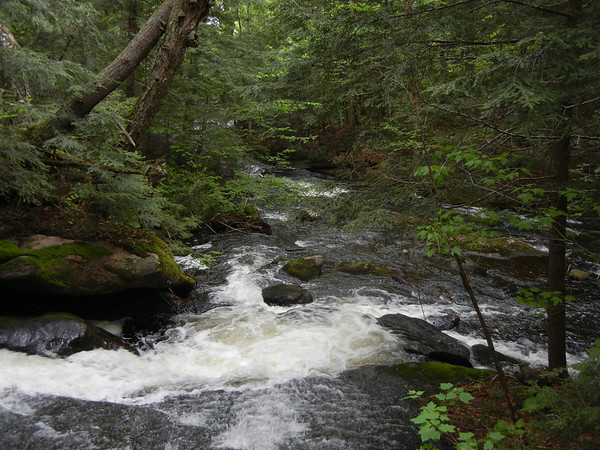 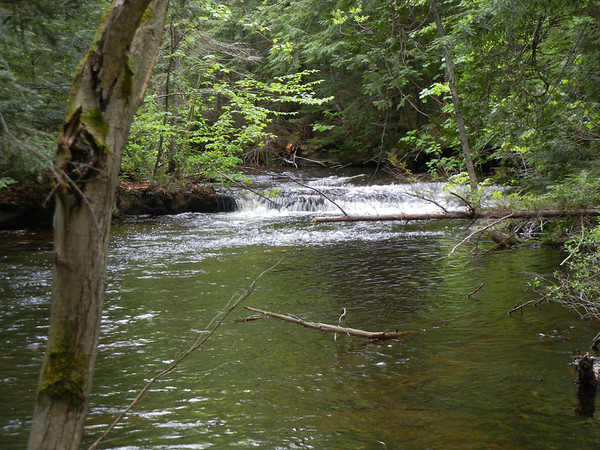 Up the road a bit I spotted an "old highway". You know, when they rebuild a road sometimes they cut a new route for a section and leave the old pavement behind. And it gets all overgrown and everything. And then you can ride your motorcycle on them, and pretend you are now in some post-apocalyptic world, most likely caused by an unstoppable viral outbreak, or even better ... a zombie outbreak. And then you run around with a stick and pretend it's a gun shooting into the woods at imaginary zombies/post-apocalyptic mutants. You know.

Then back into Mattawa. There's a small marina on the river there, and I noticed a cool wood motorboat down there. Plus, I always like to visit marinas, they're just plain pleasant. Plus, if you ever need a bathroom ... marina's are your friend. 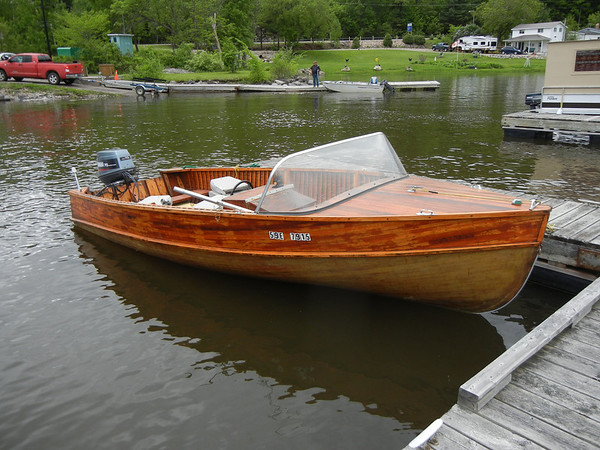 There was a small group fishing. Turns out the were a group of Alqonquins. First Nation folks, the term of art in Canada. I like it better than "American Indian". Anyways, really interesting to talk to. Good stories. One about "big American boys" who would come up to some sort of summer camp and canoe in fabric covered canoes. They'd occasionally take a moose (permit be damned) and get full. Apparently if you eat a moose without letting it age a day or two you'll the the ... intestinal distress. They have cards that let them hut at will on the provincial parks. It was one of those times I know I can't keep up, so shut up and listen. Really, looking back, I should have taken a seat and dedicated the rest of the day to hanging with them. But it would have taken more social skills than I had at the time, I am a bit of a loner.

But, friendly as they were, they told me about a cutoff road that cut back over the North Bay. Now, it was about 5:00 and I was heading back to my campsite. But, now the genius of setting up my camp in the morning is clear to all of us, right? Heck, it didn't get dark until 9:30, I had plenty of time. And if I ate on the road, all I had to do at camp is climb into the tent.

So I went in search:

So, onto the trails. The folks fishing described a nice dirt road that cut over to North Bay, easy riding for a motorcycle. I was on trails. There were green, blue and black: easy to difficult. What I thought was green (all I wanted to be on) turned into pretty heavy sand. It was fun, but I was pretty aware that if I got into trouble I didn't have a lot of backup, or cell signal: 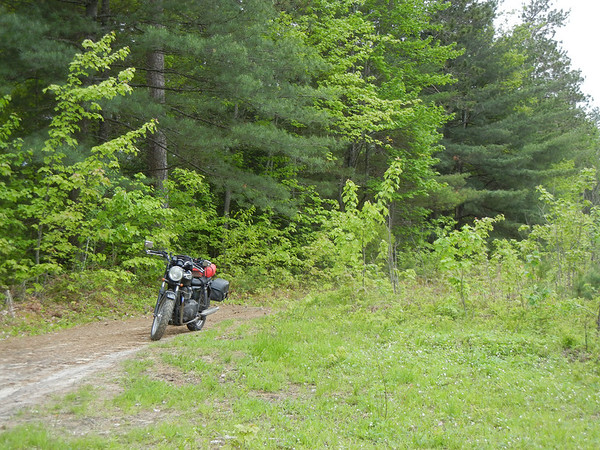 I was getting more confident in sand though. You can't be timid, but you can't get to aggressive either, at least not at my skill level:

Even if I hadn't been alone, this downhill was way more aggressive than I wanted to handle alone. And to be honest, if someone had been with me I probably would have wimped out anyways:

So I turned around, floundered around, and found the road the Algonquin's had been talking about. It was an easy ride: 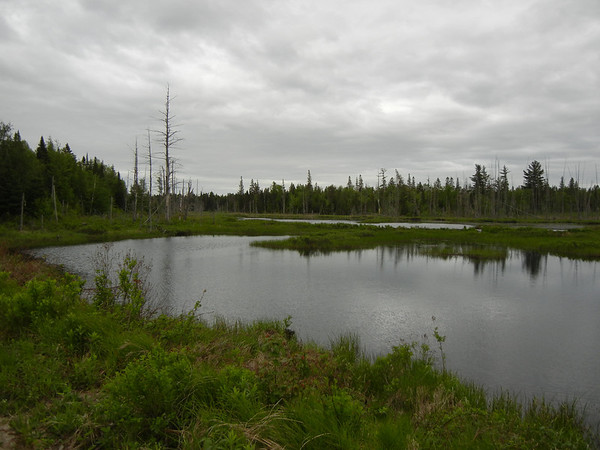 Canada has some sort of free camping, I don't know the details, but there were RVs and stuff parked in miscellaneous places I did notice:

Then back to the campsite. It was a good day. Less miles is more sometimes. A couple Molson Canadians, some salty treats and to bed. 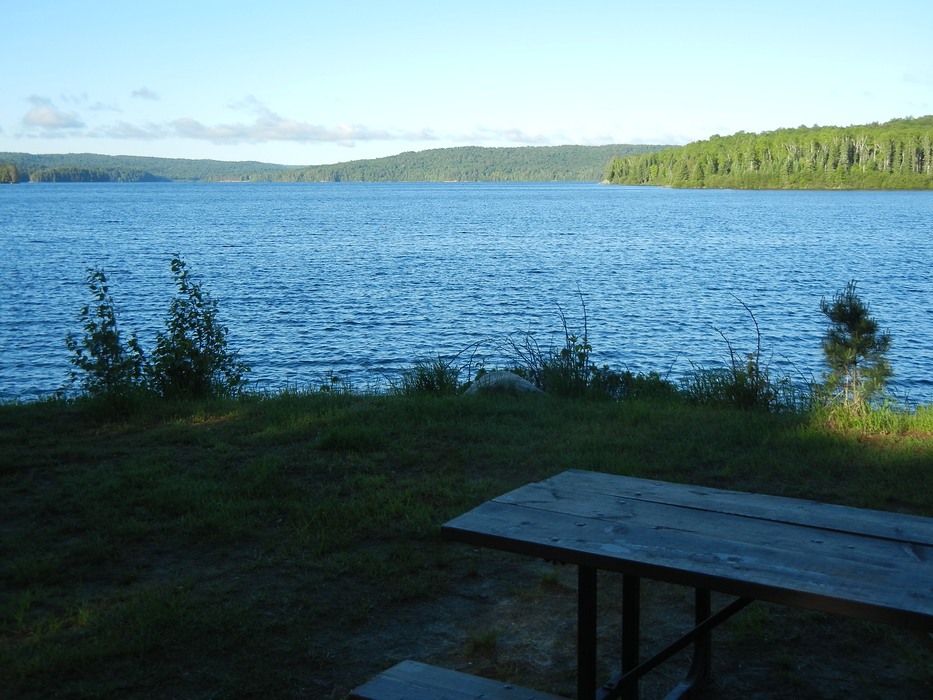