The bike did fine on the dirt roads. They were pretty utilitarian though. The roads in the national forest in the MI Upper Peninsula (UP) tend to be narrow and windy. Same in the Chequamegon forest. These were wide and flat and predictable. I think it's because many of them used to be railroad beds:

The bike was pretty steady. I'd run mostly between 40 and 50 mph. The thing was, every once in a while the front tire would grab something loose and twist to one side. The rear would jump out sometimes too, but that was OK. When the front jumps around, it's a bit more unnerving. It kept me on my toes. I didn't upgrade my tires, just had some Avon Roadriders on. Not sure if some Anakees or something would have helped more. Biggest problem was the washboards that built up on the roads

I do explore ATV and snowmobiles trails from time-to-time. The Bonnie does fine, her center of gravity is nice and low and the seating position is suited for it. One worry is flats, I don't carry a spare tube because I just don't think I can get a wheel off and back on in the wilds without too much drama and damage. The other on this trip was getting hurt. There was zero cell signal most of the time. Even on Labor Day weekend I saw almost no one on the main dirt roads. There were very few ATVs out. If I had broken a leg out there on a remote trail, it could have been quite a while before I was found.

I started the morning heading up to the end of the Sawbill trail to check out Sawbill Outfitters. They are on the edge of the Boundary Waters Canoe Area (BWCA). I figured it would be a little shack, with maybe a grizzled old man giving out advice or a couple young wilderness turks helping people on their way into the wilderness. But, it was a big business. There was a parking lot with 50 or more cars in it, a canoe rental with hundreds and hundreds of canoes, a store selling camping supplies and groceries, and a USFS campground.

The campgrounds were along the edge of a the lake in the "wilderness". Folks canoed out to them. It was a pretty area, but not really wilderness. I suppose if you forgot your TP you could yell across the lake to your neighbors and ask to borrow some

The place did sell beer, and had showers. I told them I would be back.

From there just rode some more dirt, this was the prettiest one. Gotta love a full canopy:

The found where the Superior Hiking trail meets the Temperance River. It was weird, I had no particular place to be and no schedule I had to adhere to, but I felt like I was in a hurry. There's always that tendency, but I can usually control it well. Maybe it was that riding the dirt roads took so much longer to get anywhere. Maybe it was because I hadn't found my breakfast diner I had promised myself yet. Anyways, I did get off the bike at and hike down to the river, it was a good decision. Just a great waterfall and not too many folks there at all, for Labor Day weekend:

It was a beautiful day and hanging out on the river was nice. Weren't crowded at all, just a couple hikers and a small group jumping from the low cliff, very laid back. Down on Rt 61 by the mouth of the Termperance it a zoo. All the Labor Day traffic was stopping, mostly to see what everyone else was stopping for I expect. Yuck. And just a mile away was tranquility. Yellowstone is the same way, it's a tourist trap unless you walk 100 yards away, then you're on your own.

Then down to Rt 61 to look for breakfast. I found it, sat outside and shared a table with a nice lady who was in Duluth working on flood recovery for the Feds, writing low interest loans for those who didn't have enough cash on had to deal with it all. She was nice, but I think I was a pretty bad table mate. I was tweaking, needed my food so I could get back on the road. Odd.

The a couple stops on Superior, and up Rt 1 towards Ely:

Went around a barricade to ride on a closed section of Hwy 1 which was bypassed during some upgrade:

Hwy 1 is great. They are doing construction "fixing" the best part of the road, but there are still lots of tight corners and fast sweepers left. It's a great road.

Then I got to the construction. No one was around. I don't mind a rough road. I decided to explore. 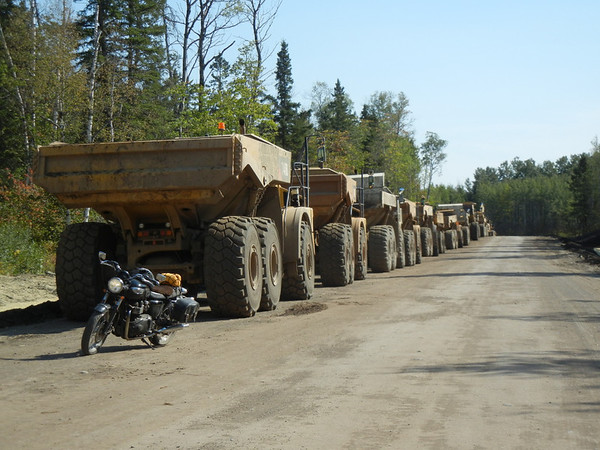 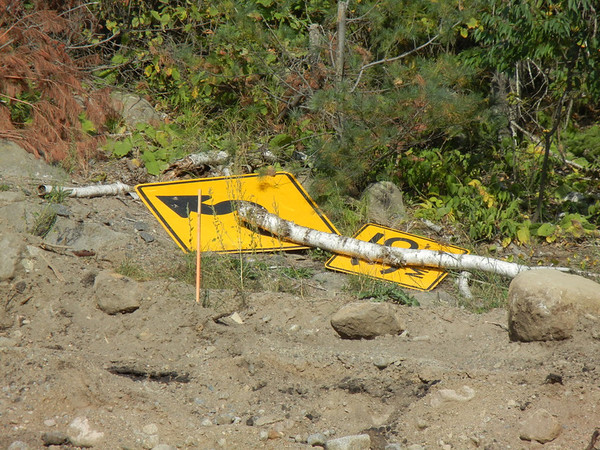 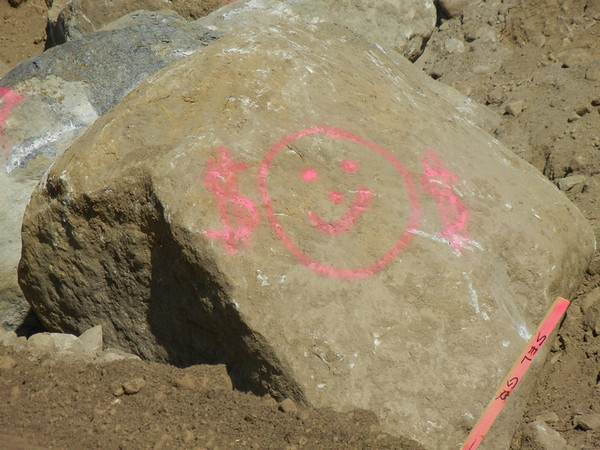 Construction is delayed because they found more bolders and ledge then expected. The contractor is out some bonus money for running behind deadline. Looks like someone doesn't mind though!

From there to Ely for gas, then back down the closed highway a bit to catch a forest road towards camp. Did make one side trip up to a BWCA access point. This one had access to true wilderness: 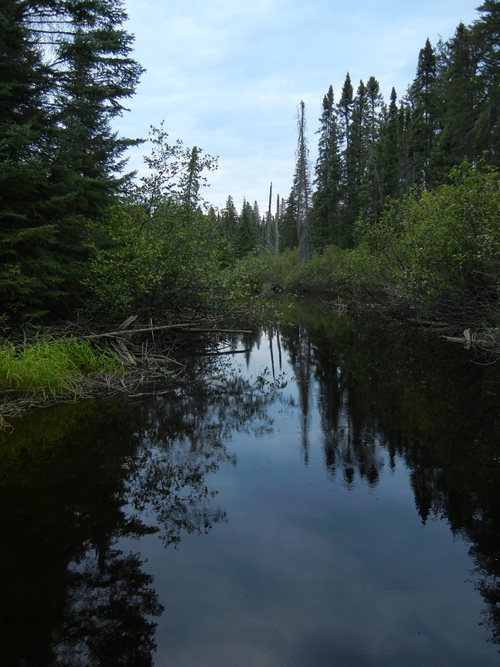 I was going to be riding after dark, but no worries (I kept convincing myself, why was I in a hurry?). I didn't have to setup camp or anything. I made stops along the way:

Stopped back at Sawbill Outfitters to pick up dinner to bring back to camp: 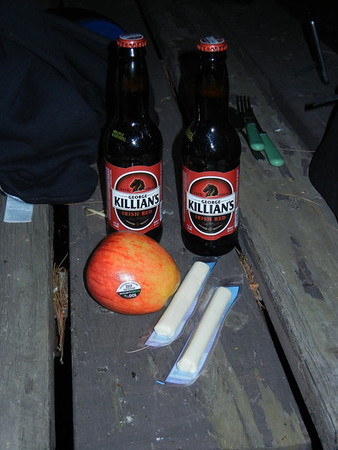 And rode back. Lots of snipes on the road, but not much other wildlife. A bird bounced off my face shield and I doubled back to see what it was. It wasn't a bird: 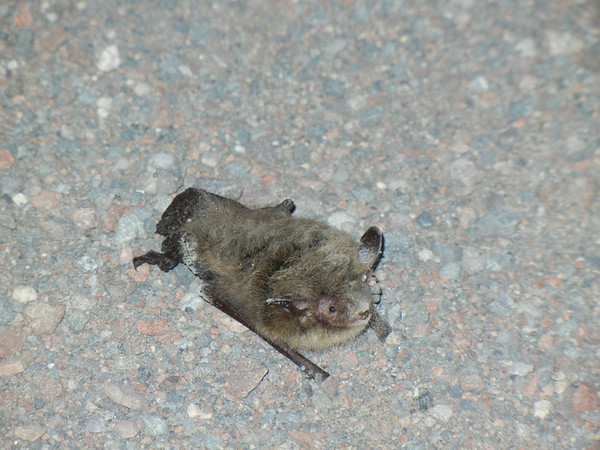 I studied bats as a grad student, I've trapped and handled plenty of them. This one didn't seem hurt too bad. I hung it up in a tree to rest, and it immediately flew off. A regular Dr. Doolittle I am.