The storms had cleared and I got packed and back on the bike pretty quick and was on the road pretty early. My camping neighbor had this huge tent-mansion setup with a tarp over it ... and it was all on it's side, a victim of the storms. I think he ended up sleeping in his car. There's something to be said for the simple two-man backpacking tent.

I set out to ride the Echo Trail and get myself into Canada. 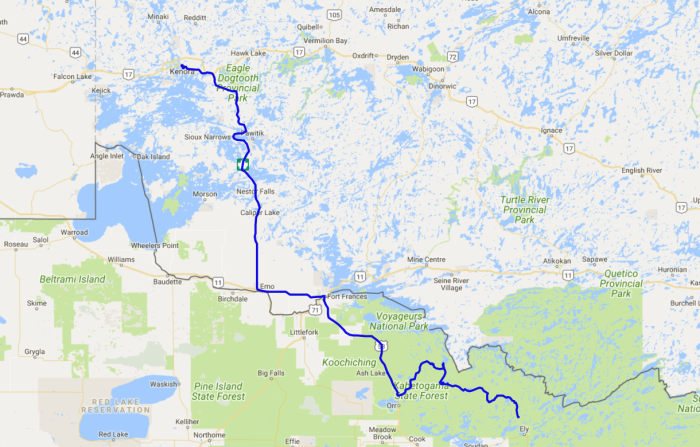 The Echo Trail is packed gravel after the first few miles of pavement. In good shape but I saw very few other vehicles. I may have seen more float planes than pickups. It was pretty silent up there, expect there was usually the buzz of a float plane going somewhere in the background.

The first kinda cool find was an outlook over a lake with graffiti on the wall. But not just graffiti, but nice quality stuff with bright colors. Worthy of Quebec even, where the graffiti is classy. 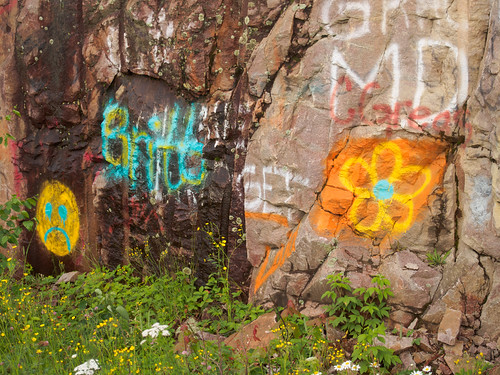 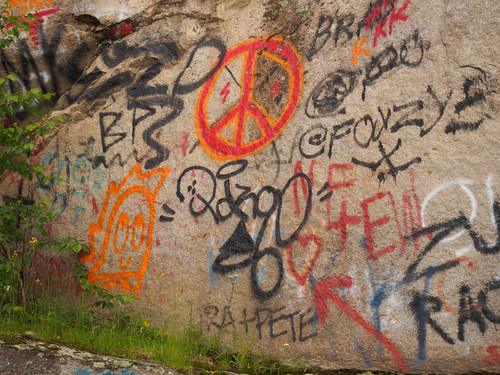 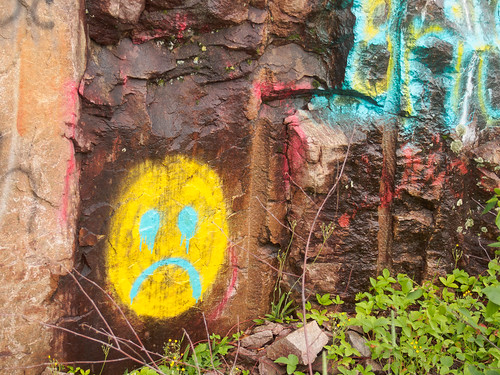 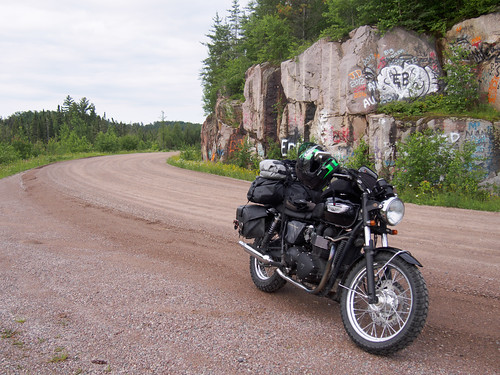 The scenery was nice along the Echo Trail. Lots of marshes and small lakes to stop at. I made breakfast on a bridge over a small river, cause it didn't look like I was going to run into a diner any time soon. 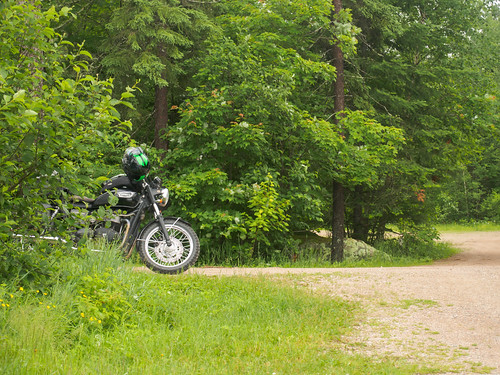 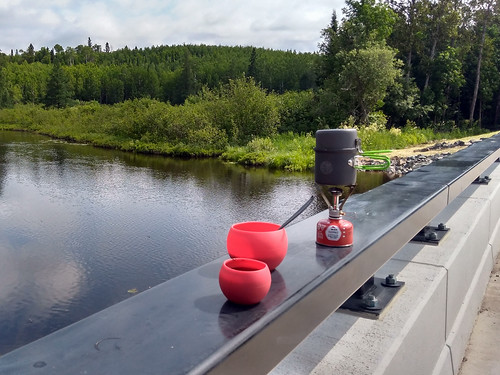 I stopped at a lake at this series of piers that I expect supported train tracks back in the logging days. I went down to the edge to wet a rag to cool off with, and I upset a couple of crayfish who shot out into the lake. And through the clear water I see this big old bass comes shooting out of the shadows and hits one of the crayfish like a freight train. Pretty good wildlife sighting there. Plus a crow that flew over with four little legs hanging out of it's beak, maybe a baby bunny or something. 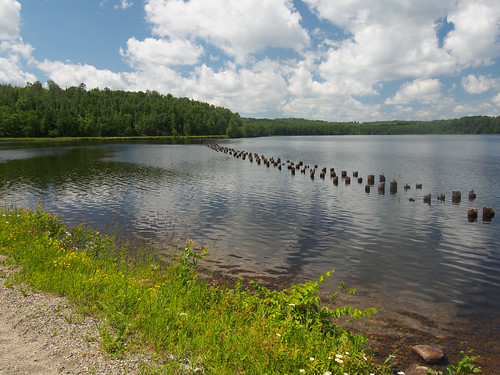 At the west end of the Echo Trail you're just a bit south of Crane Lake and the "end of the road". The Voyageur statue is interesting. Erected in 1959 it really captures the voyageurs surprised reaction to meeting new people. Loners by nature, when they ran into others on the back country streams they'd give this big-eyed fake smile and say "glad to meet you" in a hesitant way that made you think they were faking it, and weren't glad to see you at all. The statue captures this perfectly.

Then a run up to Crane Lake, north of that is just a big lake then Canada. It's an entry point to the Voyageurs National Park. I filled up at the little marina. It was kinda odd, run your card at the kiosk then walk out to the dock and grab the hose and walk it up to the bike. But it worked. I didn't spend a lot of time there, there was a lot of vacationers. If there had been a cool coffee shop or something I would have sat around, but the town had a bit too much hustle and bustle going so I went back to the gravel roads.

My phone showed a series of gravel roads that worked over to Rt 53, so I grabbed those. I saw a sign for Vermilion Falls so I figured I should check that out. Very cool place. There is a fairly wide lazy river that gets dumped through this 10 foot wide granite opening. There the slow river turns into this absolute torrent as it rushes through the narrow gap, and then resumes its lazy manner downstream no worse-for-wear, albeit with a bit of white froth here-and-there. Deer flies drew quite a bit of my blood down there, but otherwise it was an excellent stop.

Once I hit Rt 53 it was time to stop lazing about and to make some time. The International Falls/Fort Francis crossing into Canada was non-eventful, and the towns didn't really seem worth exploring. The ride west wasn't interesting, but when I started heading north again it got pleasant. But I pretty much just forged ahead with few stops to find a place to sleep around Kenora. I stopped at the Tim Horton's to borrow their wifi searching for a campsite, and ended up standing there among a bunch of folks waiting for the Greyhound bus. No one takes the bus unless they have to, and ... well this was an interesting crowd who I minimized eye contact with. I ended up in the Kenora municipal campground, what wasn't awful, but wasn't really good either.

With tent setup I went looking for a place to eat. My friend had said there was a good brewery but it looked a bit crowded, so I found a nice restaurant on the lake where I could sit outside. The meal was good, although the chef's disdain for vegetables showed as he gave them no love in the kitchen. Ontarians do seem to hate their vegetables, and they treat them poorly.

Then back to the trailer park, I mean crowded campground, and slept fairly well looking forward to tomorrow. 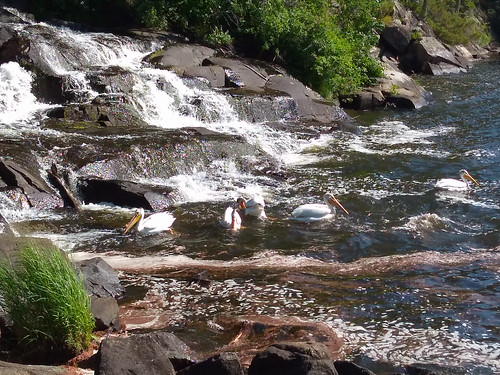 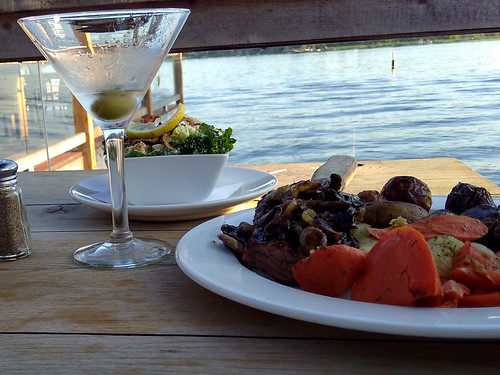